Directors Benjamin Renner and Patrick Imbert adapt graphic novel for the big screen in a set of charming and gentle 2D-animated fables aimed at audiences of all ages. 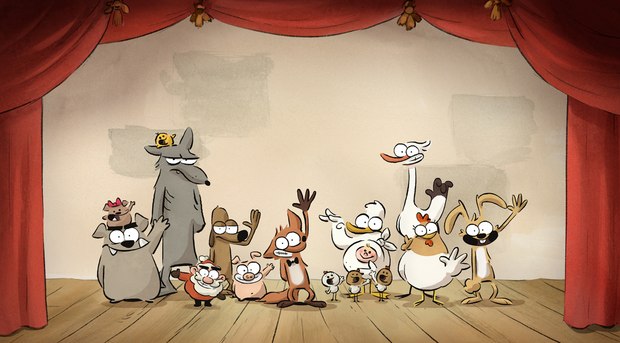 Directed by Benjamin Renner and Patrick Imbert, The Big Bad Fox and Other Tales is a 2D-animated French film based on Renner’s graphic novels that tells the barnyard tales of a Fox who mothers a family of chicks, a Rabbit that acts like a stork, and a Duck who wants to be Santa Claus. The directing duo previously collaborated on 2012’s Oscar-nominated film Ernest & Celestine.

The first feature to emerge from Folivari, the animation studio headed by Didier Brunner of Les armateurs fame, The Big Bad Fox and Other Tales had its world premiere at Annecy 2017. It has been nominated for four Annie Awards as well as a Lumiere Award -- one of the highest honors in the French film industry. Last year, GKIDS picked up the North American distribution rights to the film, which is currently one of 26 animated features under consideration for a nomination in this year’s Oscar race.

Renner explained that the characters have been with him for quite a long time, and that he would draw them as home-made Christmas and birthday cards for his family members. “I used to draw them when I was in middle school. It started with the duck and the rabbit,” he recounts, describing how he would make the cards as mini-graphic novels, designed to explain why his family members wouldn’t be getting a present that year, (because one of the characters lost it), which became a family tradition he continued into his 20s. “I was always playing with the characters,” he says. “I mean like, friends... I like to draw. At some point I decided to make a real graphic novel, and I did ‘Big Bad Fox,’ based on a story I had in my mind for quite a long time -- the idea of a fox raising chickens, [after he is] mistaken as their mother. So I thought it was a good comedy starting point, and I started drawing the story. And I gave it to my producer, [Didier Brunner] and he immediately wanted to adapt it.”

For Renner, the biggest challenge in adapting the graphic novel for the screen was that, “they’re not the same language,” he says.

“First, the way I drew the graphic novel, it was very quick. I mean, the backgrounds, they don’t even exist,” he elaborated, “It’s very spontaneous. I just added watercolor, but there’s almost no backgrounds or very few backgrounds. And of course, when you do a film you have to change that. You have to have backgrounds in order to be cinematographic… If you want to use a camera, you have to have a background. If not, it doesn’t mean anything.”

Renner added that they enlisted the aid of some of the background artists who had worked on Ernest and Celestine. “They look like they were made hand-drawn, but actually it was made on a computer,” he reveals. “And they are really terrific at that. They add all those great details everywhere, so it feels really life-like, and let’s you understand that these backgrounds add a history.” According to Imbert, the film was produced by a very small team of about 6-10 animators. “We were happy with this because we selected only the people that really fit into the style,” he says. “And they’re all really efficient, so we didn’t need more. We just wanted the good ones.”

Imbert added that there weren’t many assistants or other staff involved, so they were all able to work in the same room, making collaboration and communication all the more efficient. “We are all friends, and we can talk easily, and this is very important,” he says. “For us, it’s kind of natural. But unfortunately, it’s not always the case, in all productions, but it should be like this, because this is the best way to make the scenes.”

Renner added that he didn’t want the work to become frustrating. “When I did the graphic novel, for me, it was a way to relax and be recreational. And I really didn’t want those characters to become a pain. I wanted to love them and I don’t want to be disgusted,” he says. “And I feel the animation team was happy, and they could really focus on being artistic, and not being stressed.”

Overall, Renner says that he was going for a light-hearted comedy both parents and children can enjoy. The film itself is framed as three short stage plays, which play out as episodes, each centered on a different character -- a bit like the Vaudeville framing style of the classic Looney Toons vignettes. Renner explained that it was originally envisioned as a TV series, but then the producer came to them and asked them “to find some way to connect all the stories,” as a feature.

“So, this was problem,” says Renner. “We tried to find some way to connect all of the stories, and eventually we [ended up] doing this stage performance. In a way, it was sort of making fun of ourselves, like we don’t have any [other] way of making this make sense.” He added that they were also able to poke fun at their producer, putting him at the end of the scene sweeping the floor, as a little bit of payback for making them convert a series into a feature.

Renner explained that the second of the three plays, which focuses on the Fox who becomes mother to three newly hatched chicks, is perhaps the closest to his heart. For that episode, he drew on his experiences as a teenage boy struggling to be “manly” alongside his friend, (the Wolf), who is “ferocious, and clever, and smart, and handsome, and charismatic and everything.”

“At some point, I think I just decided, ‘Okay, I’m not made to be that manly. Let’s forget about this. Let’s assume that I’m a chicken. The story is about this, when you forget this idea, you can just let it go and be yourself. Forget about what people are expecting from you. I can be happy with another way of being myself. And the fox is the same, you know,” Renner says. “I think we can extend this idea to all the artists, because when you are a drawer, an artist, you are really the big guy, weather you are shy, or weak. We’re almost all like this.”