Behind the Music and Animation of ‘Doug Unplugs’

DreamWorks Animation’s musical kids’ series, created for Apple TV+, follows the adventures of a young robot who ‘unplugs’ from his fact-based world to experience the wonders of the human world with his best friend Emma. 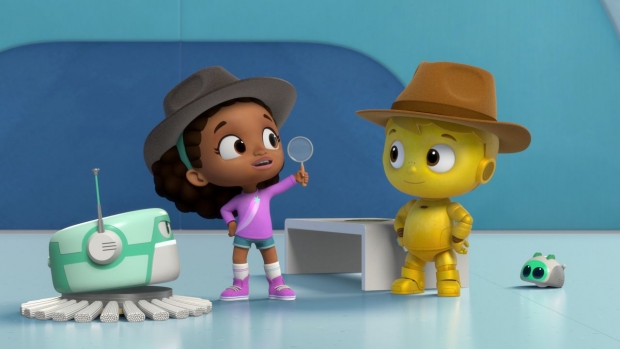 Getting kids to learn about the world around them, “tuning in” to their own gears and dancing how they want, is the power that fuels the creative engine of Doug Unplugs, a show about a young robot anxious to “unplug” from his everyday robo-deliveries and go on adventures with his human friend Emma.

The DreamWorks Animation musical series, created for Apple TV+, is based on the “Doug Unplugged” children's book series by Dan Yaccarino; the most recent set of six Season 1 episodes launched on the streamer last month.

“Doug's got some big new experiences coming for him in these new episodes,” says executive producers Jim Nolan and Aliki Theofilopoulos. “He'll visit a museum for the first time with his Uncle Forkrick, go camping with both his and Emma's family, figure out how to give his mom the perfect gift for her ‘builtday,’ and more. We'll even meet his space-going lunar robot aunt, Aunt Rover. We're so excited for everyone to check them out and hope kids have a blast on these new adventures with Doug and Emma.”

Most of the show is animated in 3D/CG, drawing inspiration from Yaccarino’s original illustrations while also feeding viewers some great Rolie Polie Olie nostalgia with geometric-led designs as well as the show’s little yellow bot and his tech-minded parents.

“We wanted to create a world that was slightly futuristic, with some fantastical elements, while still being friendly and accessible to preschoolers,” Nolan and Theofilopoulos explain. “With our art director, Matt Doering, we came up with a shape language for both the robot and human worlds to help differentiate the two, so our audience could really feel like they were visiting two different spaces. The robot world used a lot of rounded shapes to keep robot-made items feeling friendly. In the human world, we used more stylized lines with fall colors and bright lighting, which kept the world feeling warm, despite it being a totally new space for a curious robot boy to explore.” For storyboarding, the team used Toon Boom Storyboard Pro, while their designers used a variety of software, from Photoshop and Sketchup to Maya. Produced in collaboration with Glowing Studios, Doug Unplugs was primarily animated in 3D/CG, though moments where Doug discovers something new, and everyone busts out into song, are animated by Sean Carrow in layers of 2D, almost like a scrapbook, using After Effects.

“As these are the moments where Doug ‘plugs in’ to learn about a new concept, we wanted them to stand out from the rest of the episode,” Nolan and Theofilopoulos share. “We also wanted to ensure they didn't feel teach-y or didactic; we wanted this to be a fun feature of the series that kids could look forward to. So, we opted for a silly, fast-paced visual 2D style to pair with our catchy songs, written by the insanely talented team of Ryan and Courtney Lofty.”

The producers add, “It was a great challenge figuring out how to keep these moments informative but also danceable.”

Both EPs have worked on children’s animated series before - Nolan on Nella the Princess Knight and Charlie's Colorforms City, and Theofilopoulos on Phineas and Ferb and classic Disney animated musical movies like Treasure Planet and Hercules. And both creators brought their own experiences to the table to create Doug’s “danceable” and “singable” series. “If there's one thing we've both learned over our careers it's that we love putting music in our shows,” they both note. “And so of course we wanted to find the right way to incorporate it into this series. As each episode features Doug plugging in to learn a new concept, this felt like the perfect opportunity to make his learning fun, and we had a blast pairing our catchy, contemporary songs with fast-paced silly visuals.” Finding the balance between creating a fun, musical world while not oversimplifying complex ideas for kids was also something Nolan and Theofilopoulos had learned over the years working on a variety of kids’ animation projects.

For them, the key was in character relatability.

“We wanted to make sure our characters, particularly leads Doug and Emma, felt like real people kids would want to spend time with,” the EPs say. “While Doug and Emma are always up for fun and are always well-meaning, they can make mistakes and get things wrong. They're not perfect archetypes. We also spent a lot of time playing with their dialogue as well as their posing and animation to bolster their unique personalities and vibe.”

In addition to the clever and diverse songwriting and eye-catching animation, Nolan and Theofilopoulos hope the sincerity of Doug Unplugs’ characters help kids “plug in” to the individual stories, feel valued as young viewers, and go on to give the show success.

“While Doug and Emma are learning throughout each episode, our goal was to make sure it came from a genuine place, one that isn't talking down to kids but including them,” say the EPs. “And we hope that kids have as much fun watching the series as we had making it.”