Beau DeMayo Talks Blood, Guts and Honor in ‘The Witcher: Nightmare of the Wolf’

For the writer and producer of Netflix’s new anime feature about the life of Geralt’s grizzled mentor, Vesemir, viewers hopefully grapple with the moral dilemma of whether sometimes dark and horrible ends justify the means. 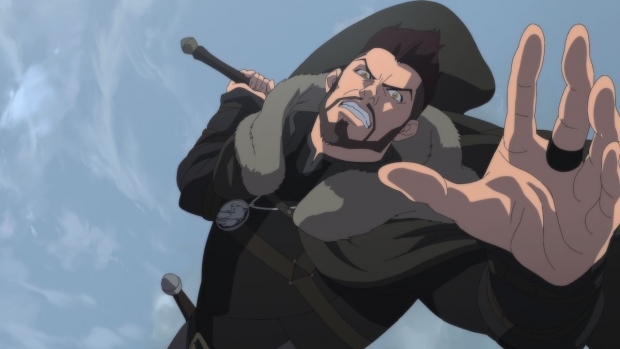 Before there was a Geralt of Rivia, sorceress Yennefer of Vengerberg, or a Crown Princess Ciri, there was Vesemir. We know him as Geralt’s grizzled mentor in the live-action Netflix series The Witcher ­– based on the books by Andrzej Sapkowski – but, like any character encountered at a late stage in their lives, that’s only a small part of his story.

Now, Vesemir’s saga has been brought to life in The Witcher: Nightmare of the Wolf, an 80-minute, animated feature film that premiered this past Monday on the streaming giant. In it, we learn how, as a child, Vesemir willingly gave up his life as a human to train at Kaer Morhen and become a powerful, beast-hunting witcher. We also learn about the horrific trials he underwent, and the friends he lost along the way, in his tortuous journey of self-discovery.

“What I love most about Sapkowski,” says writer and producer Beau DeMayo, “is that he is unapologetic about the witchers not necessarily being the good guys. For Vesemir, it’s a fine line between telling a story that's somewhat aspirational – giving you that wish fulfillment of, ‘What would it be like to be a witcher and shoot fire from your hands?’ – but also [acknowledges the dark side] of the witchers. They do take kids. They do work for money. And not all of them are honorable men. I do think the film goes to a place where it leaves you, hopefully, with a moral question: Do the ends necessarily always justify the means when you're facing a world as harsh as that in The Witcher?”

Directed by Kwang Il Han (The Boondocks) and co-produced by The Witcher showrunner and executive producer Lauren Schmidt Hissrich, Nightmare of the Wolf must have been a challenging project for a writer. After all, there’s not much out there about Vesemir’s past. But DeMayo says he didn’t find it intimidating – exactly.

“But daunting? Yes, in terms of, ‘How do we pull this off?’” he notes. “When Lauren first asked me to take a stab at this, we didn't have much. It was literally, ‘Hey, this is cool. Let's do an anime. There’s a lot of opportunities here. Think of a couple ideas.’” DeMayo adds, “What [made it a little easier] was the fact that we were exploring a time of The Witcher lore that was hinted at, but never defined, in the novels. So, as long as I followed my gut when writing the script, in terms of what is the Witcher world and what are the things that make The Witcher The Witcher, I was pretty confident we were going to end in a good place and had tackled this property appropriately, while exploiting what anime has to offer as a medium, compared to books, video games or live-action television.”

Condemned to life as a slave for a noble family, a young Vesemir is anxious to find a way to escape his plight. After witnessing a witcher dispel a demon from the body of the lady of the house, Vesemir runs away to try to become a witcher himself, lured by money and power. But when a strange new monster begins terrorizing a neighboring kingdom, Vesemir finds himself in the midst of a frightening adventure that forces him to confront his past.

The Witcher stories are known for their rawness, their gore, and their reflection of the underside of humanity – individuals struggling through the darkness to get what they want in life. While these stories have been told through a variety of media – including books, video games, and TV series – DeMayo says deciding to realize Vesemir’s dark, graphic story as a 2D anime was an easy choice, facilitated by Studio Mir, the animation studio co-founded by director Han and responsible for the animation of Netflix’s recently released Dota: Dragon's Blood.

“Director Han and I talked about how 2D lends itself more to medieval fantasy,” explains DeMayo. “Personally, I feel like when you have 3D and you're in medieval fantasy, you’ve got to work extra hard to make sure it works because there's something so modern and futuristic about 3D that [conflicts with] with the prettiness of a middle age or medieval story. I told Han that I grew up loving things like Berserk, Vampire Hunter D, Hellsing, things that are horror, 2D typically, and a little gritty. I think it was almost organic that, of course, this film was going to be 2D.” And the personality of the film’s swashbuckling protagonist came just as organically.

“Our personalities tend to form in opposition to our families, and so I thought if Geralt was this no-nonsense, serious dude, who would his father be?” says DeMayo. “A lot of the decisions I made to create Vesemir’s character were in opposition to Geralt. Geralt grunts, Vesemir winks. That's the personality type. Even when Vesemir’s a kid, you have that kind of charm, that Casanova-like mischief. And as much as that was a brainchild of mine, it was rooted in the books when you see how Vesemir interacts with Ciri as a grandfather figure. He is the guy who's like, ‘Yeah, I know we have dinner in an hour, but here's an Oreo. Don't tell Geralt.’”

The adult Vesemir’s easygoing personality and his nonchalant approach to facing the grotesque creatures of the Witcher universe provide a welcome contrast to the often gut-churning backstory of his days of witcher training.

“The swamp scene is something that continues to disturb most people who watch it,” notes DeMayo, referencing one of the early scenes in the film during which many witchers-in-training meet their end. “Sometimes you write a scene, you show it to people, and you go, ‘God, they're gonna think I’m twisted.’ I will also say there’s stuff later in the film that was harder to write because I love Vesemir and hurting him hurts me.” Still, much like the gory, yet beautifully animated, worlds of other medieval anime such as Castlevania, Studio Mir’s exceptional design of Vesemir’s universe makes it impossible to look away, even at the bloodiest of times. And the monster mash scenes are nothing to turn up one's nose at.

“I could go on and on about Studio Mir,” says DeMayo. “Anybody who loves anime knows Studio Mir and why we bow at their altar. They came in with so many amazing design ideas and so many different conceptions, especially when it came to monsters, of how we can turn it on its head and give people what they know – the same dish, the same ingredients – but with a different flavor. Some of our monster designs may seem off or different from the live-action series, and that is not accidental. That is done with purpose. And you will see why.”

The Witcher: Nightmare of the Wolf shines a uniquely dark light on the reality of the witchers’ world, revealing the profession’s long tradition of childhood ruination. But it also delves deeper into the psyche of what it means to be a witcher and, as DeMayo puts it, “the nature of the individual witcher that will determine if they are good or bad.”

And DeMayo hopes the film inspires some serious rethinking for viewers who have been longtime fans of the franchise. “We start to go back and think, ‘What type of a person yearns to be a witcher?’,” says DeMayo. “Most of the time it’s, ‘Hey, you can’t pay us. I'm taking your kid.’ Now, here's Vesemir, who's the unlikeliest of what we expect someone who gets into witcherhood to be like. And, as far as I know, this is the first time we've actually completely stepped into a new set of different characters that really are tangentially tied to our main characters that we know from the series. I hope what people take away is that there's enough love and romance and adventure and chivalry and honor and epic action to be had even outside of the characters our live-action series may be exploring.”