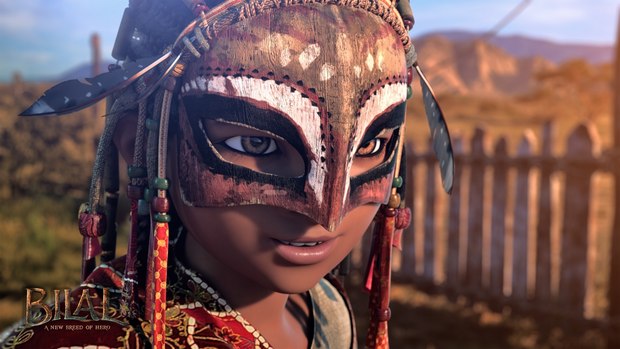 It’s been just over two years since Bilal: A New Breed of Hero had its premiere screening at the Dubai International Film Festival, and the movie continues to break new ground as the first CG-animated feature produced in the Middle East.

Produced by Barajoun Entertainment, Bilal opened February 2 in about 300 theaters across the United States, courtesy of Vertical Entertainment, with more international releases to follow. For Barajoun founder Ayman Jamal, who wrote the film story, produced and directed the movie, getting the film seen on the big screen is an accomplishment in and of itself. “We had so many offers to give the movie to a distributor, but they all wanted to release it directly to digital platforms and skip theatrical,” says Jamal. “That’s why it took us a bit longer, because we were refusing this option. We felt, especially after screening Bilal in many festivals…it should be on big screen, so we have held our horses.”

Jamal says he was inspired by his son to bring this often forgotten story from history to life by founding an animation studio. “I came one day home from work and he was wearing a Superman uniform and he was trying to fly,” Jamal says. “I realized that, for kids, most of the animation movies are based on superheroes or fantasies, which I like personally and I watch as an animation lover, but I felt that there was a gap in storytelling: Real heroes or inspirational heroes for kids and youth via animation. It just hit me. Why doesn’t someone make that?”

Jamal started pitching that question to production houses and studios over a couple of years, with no one taking the idea seriously, before deciding to do it himself.

The biggest challenge was that there were no animation studios in the Middle East or North Africa. “I was under the challenge of either outsourcing this whole project to an outside studio or creating my own studio and directing my own movie,” he says. “It was crazy, to be honest with you. At that time, everyone thought it’s a very high risk.”

Jamal took the process step by step. First, he chose to base his movie on the historical tale of Bilal ibn Rabah, who was born a slave but worked and fought his way to freedom -- this is the story the movie tells -- and later became a trusted companion of Mohammed known for his beautiful voice in calling people to prayer. Then he sought money, pitching the story more than 300 times -- out of which five investors came on board to fund it. “I was lucky to get those five,” says Jamal.

Establishing in 2013 Barajoun Entertainment in Dubai, Jamal began assembling a crew. He says more than 300 crew members signed on, representing 22 nationalities. Many had previous experience with such studios as Pixar and Blue Sky, Jamal says, and for 90 percent of the crew working in Bilal was the first time they had come to Dubai.

The story itself posed some significant production challenges. First, animated features have not often tackled historical stories, making the climactic battle scene with more than a thousand soldiers and horses a huge task. Jamal says two executive producers came onto the project and resigned after two months, saying the 11-minute battle sequence was impossible to make as part of a movie with a $30 million budget.

After briefly considering removing the sequence, Jamal decided to keep it in and eventually the studio devised a solution by creating two pipelines -- one for the battle sequence and one for the rest of the movie. The pipelines were based on Autodesk Maya as the main animation tool, with Pixologic’s ZBrush for modeling, texturing and painting, Foundry’s Nuke for compositing and Arnold for rendering, Jamal says.

The film was made in English, with a mostly western voice cast that includes Adewale Akinnuoye-Agbaje as Bilal, Ian McShane as the villainous Umayy a Ibn Khalaf, China Anne McClain, Michael Gross and prominent voice actor Fred Tatasciore. Lip sync was done to the English cast’s performance, with standard dubbing into Arabic, Turkish, Urdu, French, German, Spanish and Portuguese, among others, for international releases. Reaction to the movie has been positive, Jamal says, with many who’ve seen it complimenting the historical style. “At the (U.S.) premiere, many producers and directors who attended said: ‘This is something new to us. This is a new style. I felt like I’m watching Game of Thrones, but in animation -- especially in the battle scene,’” Jamal says. “I had so many producers who told me they frankly came for the red carpet and were sitting at the back because they wanted to leave after 10 minutes because they had other appointments, and they stayed for the end of the movie because it was a new style in animation that they never witnessed before.”

Jamal says Barajoun is looking to build on this start and has finished preproduction and about to begin animation on its second feature, Mirlo and the Magical Opus. Like Bilal, it is a historical tale about a man named Ziryab, who was born in Baghdad and became a historic innovator of music, dining and fashion in 9th century Spain. “We studied his his legacy in art school, but no one has ever told his story,” he says.

Jamal hopes to continue to telling stories from the Middle East in animation that appeal to a global audience more diverse than the typical children’s film. “I would like to see more of this style being done, more of animation for all, not just for kids.”