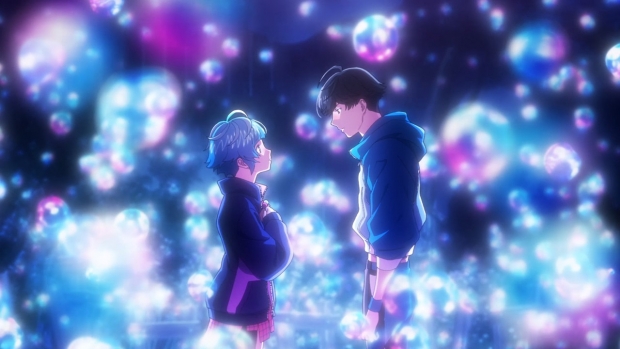 It’s a tender love story, filled with bright, luminous animation, and it's directed by a filmmaker known for, well, quite the opposite. Attack on Titan’s Tetsuro Araki, who has also directed anime like Highschool of the Dead and Death Note, saw Wit Studio’s latest anime feature film Bubble as the chance to not only do something different, but pull from his creative toolkit to make something truly magnificent.

“Up until now, I've been known from my previous works as a violence-slash-action director,” the director says. “Bubble was a new challenge that we were embarking on because we're telling a coming-of-age love story. And what I wanted to attempt to do this time around was to tell this love story through action, using the skills that I had accumulated from those other projects.”

Bubble, premiering on Netflix Thursday, April 28, takes place in a very different kind of Tokyo, one that’s mostly underwater and falling apart since the “Bubble-Fall-Phenomenon.” After bubbles that broke the laws of gravity rained down upon the world, Tokyo - for reasons unknown – suddenly became encased in one large bubble, its energy source stemming from Tokyo Tower. Now cut-off from the outside world, the city has become inhabited by those who lost their families in the event and now participate in an incredibly dangerous parkour capture-the-flag-like competition called Tokyo Battlekour.

Hibiki, a gifted parkour player and an orphan, seems to show little to no interest in his team-made-family-unit or life in general except for the mysterious singing only he can hear coming from Tokyo Tower. On one of his dare-devil exploits to discover the source of the singing, Hibiki loses his footing and falls from nearly the top of the tower, into the water below. There, he is saved by a girl who he mistakes for a mermaid. Unsure of where she comes from, Hibiki names the girl Uta, Japanese for “song,” as she too knows about the singing at the tower and seems to hold a powerful affection for Hibiki that, in its own way, defies the laws of gravity.

“We're telling a coming-of-age love story and we wanted to tell it in a way that felt very ephemeral, that this love is slipping through your fingers,” explains Araki. “That's why we started with the motif of The Little Mermaid. And in came our wonderful screenplay writer, Mr. Gen Urobuchi, and he came up with the concept of bubbles as an extraterrestrial life force.” Uta is that very life force, who takes human form to save Hibiki when she witnesses him fall from the tower. And much like how The Little Mermaid eventually became sea foam, Uta discovers that she will turn back into a mass of bubbles, forced to return to the tower, if she touches Hibiki. Uta, who speaks very little, at one point uses song and dance - or stylized parkour - to make her feelings for Hibiki known. And it’s during this scene, that Araki felt he achieved his goal, to use the war-like action he’s known for in Attack on Titan to illustrate tenderness, warmth, and passion.

“Watching that scene, where Hibiki and Uta are dancing on the rooftops, I indeed felt a sense of accomplishment, that I was really able to utilize the techniques I had harbored up until this point and actually tell an impactful love story,” Araki shares. “And, at the core of it, we also wanted to bring forth this sense of sadness that comes with the love story, the sadness that this girl Uta harbors.”

On top of the actual movements and actions of the characters speaking to the film’s messages and themes, Bubble’s animation also plays a key role in drawing out emotion from viewers.

Though most of the film is animated in 2D, many shots are accented with 3D/CG elements to either make viewers blood rush watching scenes of characters leaping from building to building, or to promote moments of internal reflection at more emotional sequences, like right after Uta saves Hibiki and is staring at his human features, or when Hibiki catches Uta staring at the flowers in his secret rooftop garden. “There are two prominent technical features that we have infused into this film,” notes Araki. “One being - through the action sequences, which are very prominent in the film - we want you to see an amalgam of what we would like to call ‘Action Sakuga,’ which is 3D/CG, but you also have 2D Sakuga animation there.”

Sakuga is Japanese for “drawing pictures," a term used in anime to describe moments in a show or movie when the quality of the animation improves drastically.

“And the other sequences,” Araki continues, “are in those moments of pause, where we do something that we call ‘make-up.’ It’s a much more detailed approach in terms of gradation of the colors or brush strokes and an artistic choice we deliberately made for those scenes of reflection to give you a sense of what’s going on with the characters on the interior.”

In these make-up shots, characters almost look like hyper-realistic paintings, and it makes their moments of embarrassment, sadness, and excitement all the more tangible.

“For my part as a producer, what I was trying to achieve with Bubble was to bring together top-notch creators and talent in the world of Japanese anime and Japanese manga, the creme de la creme, into this one picture,” says Genki Kawamura, known for his producer work on high-profile romance anime films like Belle, Your Name and Weathering With You. “Sometimes, when you bring the creme de la creme together, it doesn't work out so well. But this time around, everyone was able to release their own flavor and yet have the picture work out as a whole.” It was certainly a gamble bringing Araki in with Psycho-Pass’ Gen Urobuchi and Aoi Bungaku Series character animator Takeshi Obata - a group of people known for their dark, violent projects - and ask them to create something sweet, soft, and sincerely romantic as Bubble.

“These people have come together on this film to do what I hope would become a Japanese Animation Festival of sorts,” says Kawamura. “And I think that it worked out very well. Even bringing these many giants together, I think we were able to arrive at a very layered picture that took its own form.”

Its backbone may be a love story, but Bubble is filled with a slew of different thematic ingredients: post-apocalyptic tragedy, the science of vortexes and the Fibonacci sequence, parkour athletics, auditory sensitivity in individuals, the cycle of birth and rebirth, and more. It’s a lot, but Araki, Kawamura and the rest of the creative team have gathered the many pieces of this story into a beautifully cohesive and complementary tear-jerking tale.

“I've worked with some wonderful animation directors, the likes of Mr. Mamoru Hosoda and Mr. Makoto Shinkai, and I’ve discovered that true Japanese animation is a form of cinematic expression,” says Kawamura. “And so, what I want to do is bring this form of cinematic expression to as many people around the world as possible, and to have them enjoy this type of work. And in that path, introduce the next big talent to the world, and that would be none other than Mr. Tetsuro Araki. I think he is a wonderful talent. And I want his talent to be seen by as many people as possible outside of Japan.”

Taking an Old-School VFX Approach in ‘All Quiet on the Western Front’
‘Natural Habitat Shorts’: Like ‘Ranger Rick,’ But for Adults
Framestore Sets Sail on ‘1899’ with New Virtual Production Tools
Animated Characters: The Art of Babbitt – Part 1
Bruce Smith and Ralph Farquhar Talk ‘The Proud Family: Louder and Prouder’ Season 2
VFX is the ‘Thing’ for Tom Turnbull on Tim Burton’s ‘Wednesday’
We Need to Chat
F is for Flake: The (Not So) Great Animation Robbery?
END_OF_DOCUMENT_TOKEN_TO_BE_REPLACED