Ascendent Animation: Giving Voice to Talent and Anime that ‘Don’t Fit the Mold’

The Black-owned and LGBTQ+-operated studio launched in 2020 to embrace the need for more diversity and inclusivity – and mature, representative storytelling - in the anime dubbing industry. 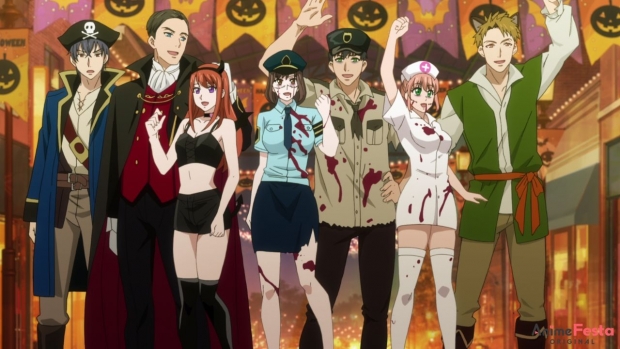 In 2020, setting up shop alongside Funimation, Sentai Filmworks, and other anime adaptation titans, a new dubbing studio “ascended.” Black-owned and LGBTQ+-operated, Ascendent Animation launched out of a need for more diversity and inclusivity in the anime dubbing industry, both regarding the talent and production staff hired onto projects as well as the projects themselves.

“For me, it came from the pain of rejection,” says Steve Warky Nunez, Ascendent’s sound engineer known for his voice acting work on video games like Camp Buddy and The Fifth Expedition, as well as animations like Spaicy and Ultra Nova. Nunez was the one who raised the call for Ascendent to assemble after live-action TV series producer K. Cornell Kellum, now Ascendent’s owner, licensed the anime Ishida and Asakura.

“I had tried to be a part of anime for decades,” continues Nunez. “The responses I received while trying to work in the industry were: ‘You don’t live in Texas. You don’t live in California. You don’t live near us.’ I was also rejected for many arbitrary reasons, such as my orientation. I worry that in this industry, we stop looking for what is new and become complacent with the familiar.”

Ascendent’s website administrator Sean Tay adds, “We look for projects that cover all walks of life. We reach out to cast from around the globe. We try not to restrict ourselves so that we can include a wide range of stories and talent.”

From the get-go, New York City-based Ascendent chose to tackle anime projects that were anything but familiar to U.S. audiences, from the TV-14, over-the-top, high school comedy Ishida and Asakura to their second dub, The Titan’s Bride, a TV-MA yaoi love story about a boy summoned to a world of giant titans, allegedly destined to marry its prince. And the studio was adamant about using remote recordings, which meant ongoing access to a global dub voiceover talent pool that has proven so important… and meaningful.

“When we were growing up, dubbing or voiceover is what brought animation to life,” says Tay. “And with such a global market for talent, as well as modern technology, it really didn’t make sense to limit a talent pool to a small geographic location. The global lockdown really provided an opportunity to give the idea of a global dubbing attempt a test flight.” The studio’s most recent project, Everything for Demon King Evelogia - featuring a gamer who reincarnates into his favorite game and becomes obsessed with the demon king antagonist - highlights this guiding principle, with most of the main dub cast located outside the United States.

“Which is unheard of for an English dub of an anime,” notes Tay. “We wanted to highlight accents and made deliberate efforts to reach out to talent with native accents for casting auditions.”

Of its five licensed projects so far, Ascendent has cast talent - some completely new to the industry - from England to Australia. But between initial translation to casting, recording, and mixing, Tay also says that one of the most important roles Ascendent plays in a project is maintaining a relationship of trust with the companies whose work they are handling, going so far as to include the original story author, whenever possible, in casting decisions for character voices they created.

“What we are trying to convey is our dedication to the projects we handle,” says Tay.

Office manager Katrina Caffeine adds, “As a diverse corporation, we really do want to see people from all different sorts of backgrounds. We want to find the perfect fit for every character. We don’t want to put a name behind the voice, we want to have the best voice behind the character. We’re looking to flesh out a story that will resonate with all who hear and see it.”

On top of isolating choices for talent, many anime dub studios shy away from highly mature comedies and LGBTQ love stories, considering them to be “undesirable” and “unprofitable,” as noted by Ascendent’s production assistant Paul Davey. This also isolates certain fanbases.

“At Ascendent, we are trying to change the stigmas that shows with an LGBTQ+ slant have,” explains Davey. “We want to prove that there is a market for these animes, and they will assuredly contribute to the successful growth of a company.”

Technical supervisor Danny Miller adds, “There was an untapped market for not only the genres that we have been producing, but fanbases that felt unheard. In the American market, it’s incredibly homogeneous, both in terms of the content being offered and the folks getting cast.”

The team certainly doesn’t blame other studios for the hesitation to license titles such as the pectoral-centric romance Fire in His Fingertips - another of Ascendent’s upcoming dub projects - as well as other anime containing more explicit facets of romance and intimacy that some actors may not be as understanding toward or as comfortable acting out. But it's a corner of the anime industry Ascendent is passionate about spotlighting, despite any supposed risk. “For LGBTQ+ and minorities, we are a market of people who want to see representation, not only in movies, but in TV and animation as well,” says Nunez. “Ascendent knows that there’s an audience for it, and Ascendent is willing to ‘take the risk’ on talent and anime that don’t fit the ‘mold’ because we know how important it is. If other companies see us having success, then I know it will become more mainstream, and I think that would be a wonderful thing.”

And so far, the audience response has been favorable. “The feedback has been really positive,” says Davey. “We are so thankful to all of those who have liked and supported what we’ve done. I, like many others, am excited to see what we’ll do next and how we will grow; not only as a company, but as a community.”

Tay adds, “The most rewarding part of the journey is being able to break into new, uncharted territory. We share laughs, burdens, and success together as we blaze our own trail. It’s a very liberating feeling. As far as goals go, we still have a wish list of projects we’d love to work on, so stay tuned for more updates down the road.”

The projected release date for Fire in His Fingertips (1&2) and Everything for Demon King Evelogia is Summer 2022. Fans can stream, watch, and buy (digitally) the released dubs of Ascendent’s titles on Amazon Prime Video.