‘Arlo the Alligator Boy’ Celebrates the Beauty in the Bizarre

Ryan Crego spent over a decade developing his red-headed bayou crooner, who stars in a new animated musical alongside a group of misfits all looking for a place to belong, premiering on Netflix April 16. 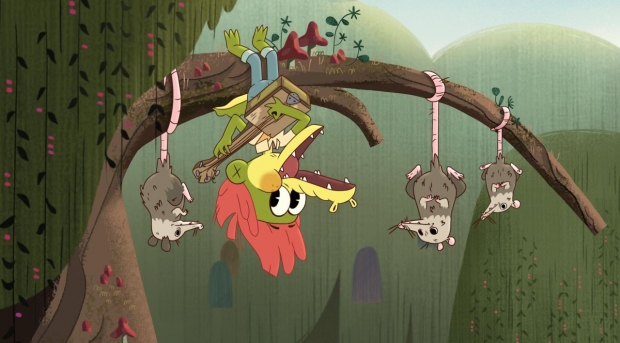 The story of Arlo, a romantic, rhythmic, red-headed reptile from the bayou, was first imagined over a decade ago by long-time musician and animation story artist Ryan Crego.

“I tend to write a lot through drawing, and Arlo was a character that started coming up in sketches, then took on a life of his own and started to steal my imagination,” recalls Crego, known for his directorial work on Nickelodeon’s Sanjay and Craig. “I grew up playing music. I played in bands my whole life and toured, then put music to the side just because I really needed to focus on my career. And then this story with Arlo woke up something inside me that I’d been missing.”

The result of that creative awakening is Arlo the Alligator Boy, a 90-minute, 2D animated musical feature film set to debut April 16 on Netflix. Directed and produced by Crego, and working with Kung Fu Panda’s Melissa Cobb, the film follows a young, biped alligator named Arlo (Michael J. Woodard) as he leaves the comforts of his swamp home and adoptive, human mom Edmée (Annie Potts) and makes his way to New York City in search of his father. Along the way, Arlo meets a group of misfits - a gambling mouse (Tony Hale), stylish hairball (Jonathan Van Ness), jaded fish (Brett Gelman), tiny tiger girl (Haley Tju), and Bertie, a really, really tall human (Mary Lambert) - all looking for a place to belong.

Using the power of music - with songs written by Crego and Trolls: The Beat Goes On!’s Alex Geringas - Arlo and his new friends learn to conquer their own doubts; these fantastical characters come to learn that they can make their own light in the darkness. “It’s a story about owning who you are, and I think that resonates with people,” says Crego. “We all want to believe in ourselves. We all want to know that we're valued and learn how to find our place in the world when we're younger and don't know where to go or what we're doing. We’ve all got a different journey. And, I think, maybe, it's also a story of persistence.”

Persistence personifies Crego’s own story, having spent many years receiving one rejection after the next in his Arlo pitching. Until three years ago. “When I was finishing my last project, Home: Adventures with Tip & Oh, it was really my wife who insisted getting back into developing Arlo should become a top priority for me because she had always loved the idea,” the director explains. “When something doesn't get picked up, or go the way you want it to, sometimes it takes someone else seeing the value for you to go, ‘There's still something there.’ And Netflix is ripe for this kind of thing, taking a lot of chances and breaking the mold a bit. And sure enough, they really got on board and believed in the vision.”

The film, which also serves as the launch pad for the upcoming I Heart Arlo series, is animated by Netflix Animation and Titmouse Inc., known for their work on Star Trek: Lower Decks, Big Mouth and Midnight Gospel. The desire to create Arlo’s story in 2D came out of a “deep Disney affinity from childhood,” for Crego that was also felt by the rest of the team as well. “I grew up loving great animated musicals like Little Mermaid, Aladdin, and Beauty and the Beast,” says Mike Roush, Titmouse’s VP and Animation Director. “When Ryan came along a year ago with this project packed full of great songs, I jumped at the chance to work on it. I think the vibe of this story also rubbed off on the team. This production was a love fest.”

“A story about being different and about acceptance is always a good motivator for me and it speaks to all of us at Titmouse,” agrees Antonio Canobbio, Titmouse Chief Creative Officer. As much as Crego admits he “geeked out” over the nostalgia of having legendary animator James Baxter - known for his 2D animation on Hunchback of Notre Dame, Prince of Egypt, Sinbad, Spirit and recently Wolfwalkers - as a consultant on the movie, the animation style was primarily influenced by the characters and their emotional journeys.

“When it came to the characters, we wanted them to have a classic, golden-age of animation quality, but with some modern choices,” Roush explains. “Each time we see Arlo we are seeing an original drawing or idea on how he should be emoting. Keeping him and the other characters grounded in the more realistic physical world helped us relate to them and how vulnerable they are, and hopefully helps you worry for them and celebrate with them.”

“Because as magical as these characters are, the world they live in isn’t always magical” adds Crego, who relied upon the painter-style illustration talents of Israel Sanchez and Margaret Wuller’s wealth of DreamWorks lighting and CG experience in creating beautiful and glossy storybook imagery as well as dingy and gritty illustrations.

He continues, “The intention was always to tell the story about a character who's nearly perfect, who has complete optimism, who sees the world as everything is beautiful… we've all got value, we're all special, we're all wanted… and then put him in the real world. We know the world to be very flawed, to have a lot of grit and negativity, where things don't always work out and where people don't always show up. That was a big contrast built into the story; you get that contrast when you look at the design.” And there is plenty of grit in the film, from more comedic moments where Arlo tries to taste-test a snail, or when the speedo-wearing fish character Marcellus recalls the terror of children, to much darker scenes like when Arlo is almost kidnapped by dirty, fly-attracting “hillbillies,” or when the young alligator is abandoned in a sewer. But it’s all for the purpose of pushing light and music to the surface.

Because, when Arlo and his friends sing, things figuratively and literally get brighter, whether by heavenly, glittering rainbows or glowing and sparkling fluorescent blue ocean waves. “When you get to those songs, they're just so uplifting and emotional and special,” says Crego. “The musical moments became the place where we could really explore the medium and push the design. We always called them the ‘music videos.’ We would do a whole color concept, special breakout color script, and design script for each of those moments.”

Canobbio adds, “We worked tirelessly on a color script until we knew exactly where we were going with the tone of each sequence. I am so proud of what we all did.”

Likening the “music videos” to “Arlo’s imagination,” Crego says the music sequences are the best moments in the film when it comes to illustrating both the contrast of the animation and the psychological state of the characters. “We see it in his first song, ‘More More More,’” he explains.  “He's imagining himself with all these people at this amazing party on the riverboat, having a wonderful time, and then it cuts to reality with a kid who's on the outside looking in. That’s our first taste of seeing that when Arlo is singing, his world can become something else. So, we allowed those musical moments to sort of go a little bit more surreal and a little wilder; we enjoyed playing with animation.” Character Bertie’s song, “Follow Me Home,” a favorite of Canobbio’s, was offered as an Arlo sneak peek for viewers at the CTN Animation Expo and was met with high praise from the audience. “For everyone who's worked on it - the animators, the actors who have been a part of it, the musicians, the people who mixed the score - it feels like all those who touch this project are so enthusiastic, and that's been a blessing in the whole process,” says Crego. “But to see it actually touch an audience that isn’t invested in it in any way, was very touching and so eternal.”

He adds, jokingly, “And now we know at least one scene is really good.”

Though Crego began his journey with Arlo long before the COVID pandemic, he believes the timing of the film’s release is serendipitous. “Making a movie with an overwhelmingly positive message, about community and supporting one another, lifting each other up, it feels like so much of what's needed right now, particularly at a time where kids are at home without their friends around,” he shares. “I really do hope that people can take away something from this character, and what we can all do for each other. At the end of the day, nobody does anything by themselves. And the journey of making this story is proof of that as well.”

“I hope that this film gets the following it deserves,” Canobbio adds. “I hope that all our nerd friends, misfits, and geeks rally to show their support and in the same token, show Netflix that making a sequel is the best thing they can do.” Following the film, the I Heart Arlo series will release later in 2021, consisting of 20 episodes, with the same cast and crew, and songs written by Crego and Geringas. A premiere date has yet to be announced.

“The movie is the journey story, and the series really takes these characters into their day-to-day lives,” Crego notes. “It’s still exciting and fun, but it’s more of a sitcom set-up. And instead of them going out and conquering a bad guy, it’s about what they’re doing now and how they’re getting along. For Arlo, now that he’s found what he’s looking for, it’s more about what does that mean for him and how does he exist in this next stage of his life. We get to spend more time with each of these characters on a more personal level, which is fun.”