The actor known as Azerzz to his 6.2 million YouTube followers lands his dream role voicing the hit animated series character behind the impression he’s been perfecting for years. 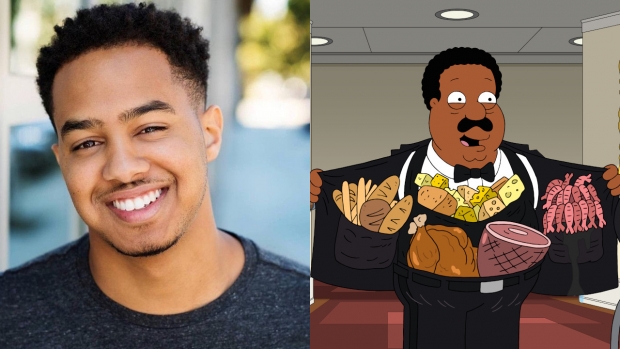 When actor and YouTube star Arif Zahir was announced late last month as the new voice of Cleveland Brown on FOX’s Sunday Night Animation Domination favorite, Family Guy, it ended speculation on whether or not series creator and executive producer Seth MacFarlane, and showrunners Rich Appel and Alec Sulkin, would replace Mike Henry in the role, or retire the character instead.

This past June, Henry announced via Twitter that he would no longer voice the character, saying, “It’s been an honor to play Cleveland on Family Guy for 20 years.  I love this character, but persons of color should play characters of color.  Therefore, I will be stepping down from the role.”

For the young Zahir, also known as Azerrz to his more than 6.2 million YouTube subscribers, hearing he’d landed the role of Cleveland was almost too good to be true, proving Cinderella stories can indeed come true. “I had to pinch myself to see if it was really happening,” he laughs. “Never in a million years did I think I'd actually have a shot at voicing the character on the show, but it was a true blessing. During the entire process I told myself ‘Don't mess this up!’ and it was surely a weight off my shoulders when I learned I got the role. I couldn’t contain my excitement even if I tried, hah!”

With Zahir taking over and voicing Cleveland for Family Guy Season 19 episodes now in production for airing Fall 2021, Henry’s voice will continue in the role for the already completed Season 18 that just recently premiered on FOX; he will also continue to voice other roles on the show.

Check out Zahir as he shares “How to Sound Like Cleveland.”

Zahir’s “Cleveland” has consistently been one of his most popular voices; he’s been perfecting his character impression for years. “I've always been an actor at heart so doing character voices growing up was second nature to me,” he says. “It wasn't until I learned Cleveland's voice that I repeatedly got the best reactions from people, whether in real life face-to-face or over video game lobbies. Like most impressions, it started out pretty rough, but over the years of practicing and watching both Family Guy and The Cleveland Show day in and day out, I started to really master the impression.”

When asked how his taking over the role of a Black character - after Henry, a white actor, voluntarily stepped aside - may positively impact future animation casting decisions for characters of color, Zahir replies, “Representation is so important within Hollywood, and I’m overwhelmed to be a part of that conversation and help shape such an important topic, opening the doors for future opportunities for people of color. Of course, I don't think voice actors should only be cast based on their race. But I think the more we’re able to provide opportunities to people of color where they clearly have a point of view or perspective that should be considered when creating and playing a character, we should. Each circumstance is different and it’s important to look at each opportunity individually and understand all the angles tied to a character; only then would I make a decision about if and how I want to take on a character. But it wouldn’t be determined just by the color of his or her skin.”

“I never thought of myself as an impressionist,” he adds. “I always just saw myself as an actor who can do some voices. YouTube started out as a hobby for me but ultimately became my bread and butter. Doing voices, and improvising, is one of the funniest and easiest ways I know how to make people laugh. It wasn't until my channel started to really grow that I started to take learning new voices and mastering them more seriously.”