Premiering today on Peacock, Emmy Award winner Tony Hale and DreamWorks Animation’s 2D animated comedy about the misadventures of a curious, loveable chicken is back with a new season of hijinks and heart. 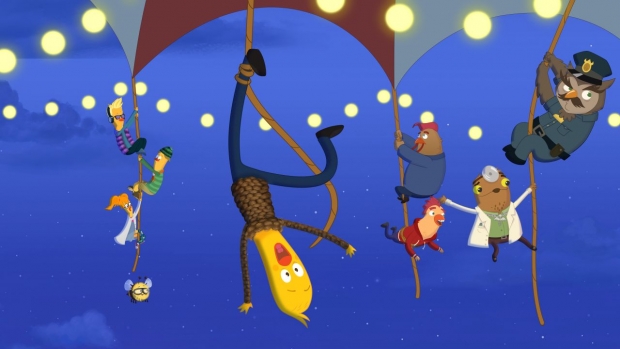 The exuberant and thoroughly unconventional bright-yellow poultry star of actor Tony Hale and DreamWorks Animation’s animated kids’ series, Archibald’s Next Big Thing, is back, returning with a new season of charming, funny, and beautifully bizarre adventures in Archibald’s Next Big Thing is Here, premiering today on Peacock. The show follows the exploits of Archibald Strutter, a simple chicken who “yes-ands” his way thru life. Though living in the moment often leads him astray, Archibald always finds his way back home, to an egg-shaped house in the center of Crackridge he shares with his three siblings, Sage, Finly, and Loy, and his trusty sidekick, Bea.

“We decided, with these new episodes, to really lean into the weird and really dive in headfirst,” explains returning executive producer Eric Fogel. “You're going to see a lot more genre-specific episodes and more fantastical adventures.”

From shrink rays and body switching to encounters with stone-age-minded cave chickens and adventuring through boardgames, Archibald’s Next Big Thing Is Here takes stories inspired by Hale’s 2014 children’s book and shifts into overdrive with what the show does best: slapstick silliness with sprinkles of fond familial messages. It was that combination of silly and family that first drew Fogel to the original 2019 Netflix series, in addition to Archibald reminding him of a favorite Looney Tunes character he was inspired by as a child.

“I was a latchkey kid, and Bugs Bunny and Tom and Jerry were kind of my babysitters,” remembers Fogel. “Nobody does physical comedy better in animation than Looney Tunes, and one of the things that I saw in Archibald was an opportunity to really embrace this kind of cartoony physicality that he brings to the show.”

Voiced by Hale, known for his roles as Buster on Arrested Development and Forky in Toy Story 4 and series of shorts, Archibald has the bright hues of Tweety, the sweet naivety of Porky, the strange physique of Daffy, and the genius - albeit often accidental - of Bugs

“As a character, he's really fun to draw,” says Fogel, whose role in the show spans not only producing but also writing, directing, designing. “He's really lanky with these long arms and legs and he's got a body shaped like a hot dog. It's really fun to draw and contort him into these weird shapes. That definitely is one of the perks of working on this show.” Since bringing his own hand-drawn cartoon The Adventures of Mutilator, Hero of the Wasteland to life in 1991, Fogel has worked in a vast array of animation styles, from the infamous 1998-2007 claymation Celebrity Deathmatch to the 2015-2017 3D/CG Descendants: Wicked World. But claymation is a recurring theme in Fogel’s career; having also executive produced for Glenn Martin DDS, the animator says it may have “subliminally” influenced the animation in Archibald.

--- Only on AWN: Read Eric Fogel's 14-part series about his days on Celebrity Deathmatch! ---

“We wanted this world to feel lived in, to have a tactile quality, and that's never more present than with that sweater,” Fogel notes. “That is one itchy-looking sweater.”

He adds, “I'm not a fan of flat. I like my characters to have volume and texture. To me, it just makes them feel more real. It was always really important to me that these characters didn’t feel like sticker-type characters that you sometimes see in a lot of TV animation. We do try to use a lot of light and shadow and to give it a more three-dimensional quality. And to help establish mood and texture and emotion, we use all the tricks that we can.”

With the series art direction led by Sierra Lewis, known for her work on The Simpsons and Tom and Jerry, the team also wanted each of Archibald’s siblings (Sage, Finly, and Loy) to have their own textural items, be it socks, hat, or vest. “I think it just brings a kind of warmth and charm to the show,” says Fogel. “As well as a relatability.” But the newest chapter in Archibald’s misadventures presented additional production challenges for Fogel, Hale, and the rest of the team as they worked with drastic dimensions of a miniature Archibald and fantasy worlds far removed from the show’s typical suburban setting.

“In the first episode of this new season, Archibald discovers a shrink ray, and he gets miniaturized to the size of an ant and has a whole adventure inside the house from this totally new point of view,” Fogel notes. “Archibald also discovers a family of cave chickens living in this primitive clan, and we do a The Gods Must Be Crazy story where Archibald introduces a bit of technology into their world and totally screws them up. We also feature a two-part episode where the family is in a role-playing game called ‘Castles and Caves’ and we 100 percent visualize what these characters look like in this magical, Tolkien realm.”

“It's a total departure from the show and there were definitely a couple of times where my design team looked at me funny, like ‘How are we going to get this design language on this episode?’ he adds. “There were times we had to make everything brand new from scratch. It definitely put added pressure on the team, but we accomplished it. Everyone was exhausted, but the episodes look amazing.”

For all its color and comedy, Archibald’s Next Big Thing Is Here also wades into deeper, more complex character psychology. “We're telling some stories this season that are really personal and emotional,” says Fogel. “In the Dungeons-and-Dragons-type episode, there's a death and the story really is about how each character grieves differently. It's a beautiful story, written by Jacob Moffat and Drew Champion. When we did the table reads of these episodes, a couple of us were definitely sobbing. It really got us.” While initially “enchanted” as a kid by the idea of getting drawings to move and breathe, Fogel, with roughly 30 years of experience under his belt, says one of the most important aspects of animation is the ability to combine entertaining aesthetics with real substance.

“That’s something we always felt was equally important to the comedy in Archibald, finding that heart, that kind of emotional substance for these stories,” Fogel shares. “And I think it's something that's been there since the beginning, and it's what makes this show just such a joy to be a part of. You can be entertaining, you can be emotional, you can be funny. You can do all those things, and it’s just magical.”