New mixed-media preschool series from the Factory and The Jim Henson Company looks inside teaching kids to get along and share by showing them self-awareness and how to sort through their own feelings. 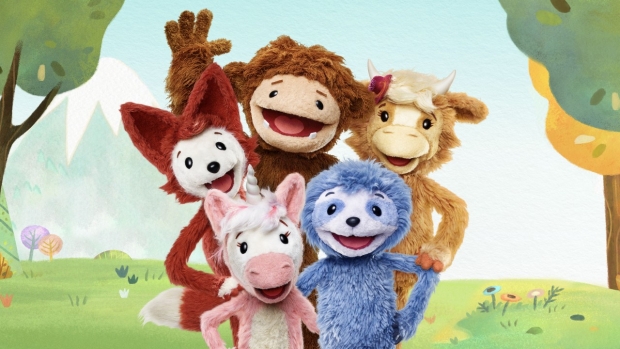 Moving to a new home, feeling a lack of attention when a new sibling enters the family, jealousy over a friend’s toys, fear of the dark, having a first fight with a friend, and the unconditional love of a parent. All of these topics are tackled in Slumberkins, the new AppleTV+ mixed-media series from Factory and The Jim Henson Company.

“Most properties are about social awareness, relationships, and responsible decision-making,” explains Halle Stanford, President of Television at The Jim Henson Company and executive producer on the series alongside Bear in the Big Blue House’s Alex Rockwell. “But with Slumberkins, it's all internal self-awareness, self-management, emotional regulation, and self-esteem. And I love that because you have shows teaching kids to get along and share, but it's the first time I’ve seen a show look inside those feelings and teach you to be strong on your own.”

Based on the plushie and book series line of the same name from Thrive co-founders and CEOs Kelly Oriard and Callie Christensen, AppleTV+’s Slumberkins series features characters Bigfoot, Unicorn, Sloth, Yak, and Fox as they explore a world of feelings in this puppet/2D animation show that empowers the emotional wellness of children through supportive storytelling. Slumberkins brings to life characters from Oriard’s and Christensen’s books who all experience a diverse range of emotional explorations, discovering that awareness of their own feelings and the ability to sort through those emotions lead to blossoming relationships and unwavering self-confidence. This was the main concept behind the original Slumberkins plushies, each with its own book series that includes interactive questions to support emotional growth.

“Usually, in kids' storytelling, an emotional problem is laid out and then the problem is solved,” says Rockwell. “But what Kelly and Callie teach is that it's not really about solving the problem but, instead, learning how to work through the emotion and move forward. Instead of resolving it, like ‘Oh, I found the toy. It's all okay,’ It’s more, ‘Oh, okay, the toy is lost. Now, what am I to do? Am I okay with that? How do I move forward? Do I need to talk to somebody? Do I need to spend time alone? Do I need to cry?’ So it’s a different kind of storytelling.”

Therapeutic practice was woven into the very fabric of these puppeteered plotlines: Oriard has a dual Master's in Marriage and Family Therapy and School Counseling, while Christensen has a Master’s in Teaching with endorsements in Elementary Education and Special Education.

“We wanted to make sure that everything, every word, every bit that we were putting into the show was coming across in a way that didn't support boxing a child into a certain way of being,” notes Oriard. “It’s really focused on helping a child process their emotional experience, and understand that other characters in the show are having their own emotional experiences.” Which is why puppets were the perfect choice for Slumberkins’ television debut.

“Puppets are the best medium to create connection and intimacy with our audience over these really deep emotional issues,” says Stanford. “Therapists use puppets for this age group to help kids feel safe in expressing their emotions.”

Rockwell adds, “There is also some kind of magic with puppets and very young children. It really does grab them. There's some sensing of a human there and it's like a soul-to-soul connection. And puppets are super effective at direct address talking to kids through the camera. We tried to put that in the show, too, and always give the kids some kind of a job when they're watching the show.”

The series’ 2D animation – used for all the cave, forest and flowery field environments – also played a huge role in creating an emotional connection between audiences and the Slumbkerkins puppets by adding what Rockwell calls, “animated enhancements.”

“Halle and I have done many puppet shows together, and one of the questions that we ask ourselves each time is ‘How do we innovate?’” says Rockwell. “We added a bit of animation to the facial expressions of the puppets to make their emotions clear. Kids really like emojis because they can clearly understand sad, happy, and all that. And then there are scenes where characters like Fox is crying, and I wanted to actually show tears. So we animated tears.”

She continues, “Each puppet character also has an animated companion – a bird, a hedgehog, or a frog – that follows them around so the main characters are never alone when they go through these big feelings.” From a world-building and storytelling perspective, Rockwell and Stanford say adding animation into the Slumberkins show opened up the scope of the types of stories they could tell, which was important as they needed to be able to cater to kids going through a wide spectrum of emotional challenges, be it anxiety or self-consciousness.

The stories have even benefitted Oriard and Christensen’s seven-year-old children who they were pregnant with at the time they came up with the idea for Slumberkins.

“Both Kelly and I are very, very tall,” says Christensen. “I'm six-foot-two, and Kelly is six feet. The character of Bigfoot was born because, as a six-foot-tall sixth grader, kids weren't very kind about me being so big. And in the episode, ‘It’s Great Being a Bigfoot,’ Bigfoot gets made fun of for being too big. I watched that episode last night with my son, who was told by an older student that he was too big to be a first grader. So, before going to school this morning he said to me, ‘I'm just big, like Bigfoot.’ To see him resonate with it so quickly fills my heart with such joy. These messages really do translate and kids just get it.”

And Oriard has her own Slumberkins success story.

“My boys love the ‘Imagine Myself to Sleep’ episode with Sloth where he has an overactive imagination, and we do that fight every night with the boys, who are seven and five,” she says. “But they both really love the song in that episode which is such a good tool for kids that are experiencing nightmares and are worried about being in their room at night. We sing that song every night. And then they use their imagination to say all of the comforting wonderful things that are in their room.” Along with the animation and puppetry, Christensen believes another key component to the magic of Slumberkins is the music, featured in every episode, by Ingrid Michaelson.

“My five-year-old daughter is an anxious child and there’s a song called ‘Our Love Will Never Break’ from one of the Bigfoot episodes and I use it almost daily with her,” shares Christensen. “The moment she thinks that she's messed up or she's done something wrong, I can see the look of devastation on her face. And then I will just say, ‘Mommy's love will never break. You are good. You are okay.’”

Stanford and Rockwell say that even their production crew started developing a personal connection with the characters, many on set regularly discussing their Slumberkins Zodiac. And Christensen hopes that everyone, not just kids, can find themselves in the show.

“Can you Imagine a world where all of us who are adults now had these songs and messages and tools that our parents could have used with us?” she says. “That would have been a nice foundation.”