‘Apollo 10 ½’: An Animated Celebration of Imagination and Creativity

Director Richard Linklater and Netflix’s new film is a mesmerizing visual collage of history, nostalgia, and childhood fantasies, vividly realized in a handmade pastiche of 2D, 3D, and rotoscope animation. 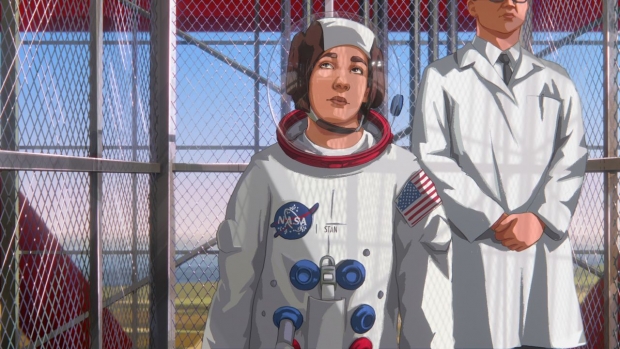 It was the summer of 1969 when the exploration of space - an idea long harbored in the minds of many young kids in America - was no longer just the fantasy of comics books and television. It was reality.

The Apollo 11 moon landing was not just a “giant leap for mankind.” It was a message to children everywhere that there was no limit to what you could not only dream, but achieve. It’s those ambitious dreams that serve as the backbone of the latest animated film by Academy Award-nominated Richard Linklater, Apollo 10 ½: A Space Age Childhood, now streaming on Netflix.

“I grew up around the same area where it's depicted in the film, just like Rick did,” says Tommy Pallotta, the film’s producer, who has also worked with Linklater on his previous two animated features, Waking Life (2001) and Scanner Darkly (2006). “Literally, I had neighbors who were astronauts. It was really cowboys and astronauts, with world-class engineers and people listening to country music, driving trucks, and riding their horses. It's not a cliche. It was real, and it was hard not to be excited about a story of growing up around that and the fantasy of doing that.”

Apollo 10 ½ tells the story of the first moon landing, but from two interwoven perspectives: that of the astronauts and mission control behind the Apollo 11 mission, and that of 10-and-a-half-year-old Houston local named Stan, entranced by the Apollo 11 mission, who fantasizes about being approached by NASA for his own space adventure. The film follows Stan’s fantasy, juxtaposed with his everyday life and the events surrounding Apollo 11. While the film is a “love letter to Rick’s own experiences growing up in Houston during the summer of 1969,” Pallotta says the film is filled with as much relatability as nostalgia.

“The story is very real and there's a lot of Rick's personal experience in there,” he says. “But Rick does have a knack for telling very specific stories in a way that a universal audience can appreciate. This is just about childhood. I tell people, ‘Well, if you have children or if you have ever been a kid, then you will like this movie.’”

Apollo 10 ½ boasts an imaginative storyline complemented by equally imaginative animation, described by Pallotta as “a handmade pastiche of 2D and other animation styles.” Utilizing the software TVPaint, the film is primarily 2D with some 3D and rotoscope animation.

“This is really about memory and nostalgia and also being in that 10-year-old’s point of view, seeing the world in this wondrous and beautiful way,” explains Pallotta. “So, the challenge for any storyteller is how do you express that in a way that audiences really get it? Going with animation made sense. But then as we're exploring the styles, it was really more about the Kodachrome look of that time and era. Saturday morning cartoons were a very big influence as much as early Disney movies. It just seemed like a fun way to really dig into that time.” Just as the film combines fantasy and reality, its animation combines tradition and innovation with bright and beautiful 2D cartoon colors integrated with extremely detailed character animation and dreamy landscapes.

“It was exciting to blend different techniques and styles,” says Femke Wolting, Founder and Co-CEO of the award-winning production company Submarine, which is responsible for producing the film’s animation. Submarine is well-known for their hybrid animation work on Prime Video’s series Undone.

She continues, “Submarine has done hybrid production before -- this combination of live-action actors, treated with animation. The film also contains archives from television and movies, which are animated in a slightly different style and mood to reflect Stan's memories of looking at the news and films at the time. We wanted the animation to express the perspective of both a child and an adult looking back; to create the feeling of memory and fantasy blending together into something new.”

The character animation specifically aimed to capture the realism of Linklater’s story, not only resembling almost exactly the voice actors playing these characters, but also capturing as much micro-expression as modern technology would allow.

“It was about grounding the film in the performances and getting that emotion in a way that was very real,” explains Pallotta. “Plus, it seemed like if we grounded it with the real people, and then everything else is completely animated and made up, that allows us to go anywhere and do any sort of look.” This freedom was particularly exciting to the team when it came to bringing to life the locations on the moon.

“At first, we wanted to be true to the existing footage of the landing,” remembers animation production designer and background painting supervisor Vincent Bisschop. “It sometimes felt we had Neil deGrasse Tyson watching over our shoulders to make sure we did it right. But, in the end, we remembered it doesn't have to be exact. It can be an enhanced version of the truth and use whatever works best for us or the scene. That's when some of the scenes really came to life.”

“The design had to work with the intent, and relationship to the story and characters, of the scene, down to the shot they were in,” adds Pallotta. “So, it took a little bit of experimentation to really understand how we were going to do that. We knew that, for example, at the house with the family, that was an A storyline. But there's a lot of time that we are outside of that - the fantasy portion of the story, the archive portion, the collage montage portions - and it was really experimental in that we were in production already and we were making those decisions and changes during production. I think that there was a certain amount of trust because it’s Rick Linklater. And we took full advantage of that.”

While Linklater had made large, research-heavy books with reference images for the story’s roughly 70 locations, including footage from the actual moon landings and rocket launches, Pallotta says he and the director tried to create an environment where their team felt that they could express themselves within their own creativity and artistry. “I believe that intent comes through whatever you're doing,” says Pallotta. “[Apollo 10 ½] is a celebration of animation. It's a celebration of imagination and creativity, and coming-of-age at that time in history. I always thought of it as like, this little boy is like Rick, realizing that he wanted to be a storyteller. It’s a celebration of visual creativity, and we just invited everybody to be a part of that. Hopefully, the joy and the creativity that we had in making it comes off the screen, and the audience can feel it.”

That fun-filled celebration of creativity Pallotta built with Linklater was not easy, as the production took place during the COVID pandemic, separating the team by thousands of miles and, in some cases, whole oceans.

“I started on the project when we first went into lockdown in the Netherlands,” remembers Bisschop. “We felt like we were working in our own online bubble, with cats on our laps trying to make this the best possible version even though we weren't able to work in a studio surrounded by colleagues. On the background team alone, we had people working from the Netherlands, France, Poland, even Ukraine and Russia. It’s surreal to think we had this experience while now, a couple months after finishing, we’re all living in a very different world.” And it’s because the world still seems in chaos that Pallotta believes a film like Apollo 10 ½ is needed now more than ever.

“Stars aligned for this production while the entire world was falling apart,” he shares. “I had some of the best two years of my life making this while everybody else was having the worst two years of their life. I was able to focus in a way that I wouldn't have been able to had the world not been in such a horrible place. And I think a lot of the people who worked on this felt the same way. I wanted to be in this candy-colored world that was nostalgic for me as well and had this sense of hope and optimism. Maybe one of the reasons why I do animation is because, when I was a kid, I wanted to live in the animated world. It seemed so interesting because anything could happen.”

He continues, “I think people need a little bit of optimism in their life. [Apollo 10 ½] is about building a rocket and going to the moon, but it's also about creating anything where your idea can make something a reality. I think we're all still a little bit shell-shocked from current events. And I think that this is a good reminder that we will look back, we will find the hope, we will find the optimism, and we are capable of doing incredible things. We just have to be reminded about that every once in a while.”