Another Chance at Unplanned Parenthood in ‘Teenage Euthanasia’ 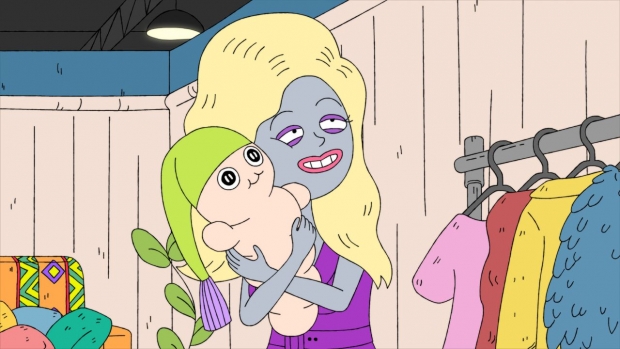 It’s not every day that the mother who abandoned her child returns... as a living corpse, ready for a second chance at unplanned parenthood.

“We had wanted to do things with an unlikely teenage daughter-mother pairing,” says Emmy-nominated producer Alyson Levy, a co-creator of the show with Alissa Nutting and known for her stop-motion, shock-value series The Shivering Truth. “The stuff I've worked on in the past is like an individual person’s vision brought to life in any kind of horrific, nightmarish way. And now we've set out to make this funny, family-centered show.”

After Annie’s birth, Trophy splits and leaves her newborn to be raised by Baba and Uncle Pete. But 15 years later, when Trophy’s dead body returns home to Tender Endings, lightning strikes Baba's homemade embalming fluid and one of Annie's tears brings her estranged mother back to life.

Check out the Official Trailer:

“I remember Adult Swim being filled with such seminal moments of discovery,” says Nutting, known for her comedy thriller series Made for Love, now recalling her early days as a teen viewer of adult animation. “I had just graduated high school and suddenly there were these cartoons with talking meat. It felt very much like a place of representation that I hadn’t seen, and hadn’t expected to see, on television. I realized, there is actually an audience for strange and wonderfully brutal types of humor.”

Animated by Augenblick Studios and produced by Warner Bros. Television, the 2D series has presented a fun and cathartic challenge for both Levy and Nutting, both of whom are parents themselves. “Trophy makes anyone look like a great mother,” says Nutting. “It's really kind of cathartic to see on screen all the things you're not screwing up.”

Levy adds, “It's a good way to work through your worst ideas and your worst compulsions. There's very little of my life in the show, but there's a lot of who I am and my creative impulses.” True to Levy’s signature storytelling style, there’s plenty of disturbing plot points - such as Trophy’s magical crotch beetles. But at its core, Teenage Euthanasia is about a woman learning what it means to be a mom. For Levy, this has added a new sense of longing for positive reception from audiences.

“I’d never really thought about this before with other shows I’ve made because usually I put a show out and it’s like, ‘Ok, who cares. We made what we wanted to make,’” she says. “But I actually do hope people are connecting with this story in some way.”

Even the crotch beetles have their moments of relatability in the show.

“The episode I like a lot that was really fun to make, is the one where we delve into the world and the society of Trophy’s crotch beetles that live inside her and give her powers and do her bidding,” says Levy. “We show that one of the beetles has got hopes and dreams that coincide with Annie's and Pete’s. And it was fun to hear a lot of great people do voices for that one.” And in addition to being a mother, Nutting has her own special connection to the show, being from Florida herself. “Maybe that’s why these characters have always been 2D, to me,” she shares. “Even the real Florida, there's something a little 2D about it. And it’s actually ended up being a lot funnier to have the show be about these weird, but real-feeling Florida people.”

The series’ art director, Abby Jame, is also a Florida native and the show’s animation style stems from Jame’s own comic book creations.

“Alissa and I both worked with Abby a long time trying to come up with the looks of everybody,” says Levy. “By the time we actually saw the full thing 100% animated, both Alissa and I were like, ‘Oh, yeah, this is how we imagined it.’ It weirdly looked just how I thought it was going to look.”

Chock-full of color, craziness and contemplative messages, Teenage Euthanasia represents the magic that comes with granting creators full permission to express their vision and tell a story without societal boundaries. It’s a tact Adult Swim has been known for and why experimental, unapologetic animation continues to thrive.

“Adult Swim allows a creator to have a single vision, which usually is not the case,” says Levy. “And there is a more genuine tone underneath that intrigues us and enables Alissa and I to say whatever it is that we need to and want to say in the world through this show. And hopefully people find it funny. And even if they don’t, I hope they enjoy hating it.”