What do sheep, wolves, surfing, a western heroine, and slacker musicians all have in common? 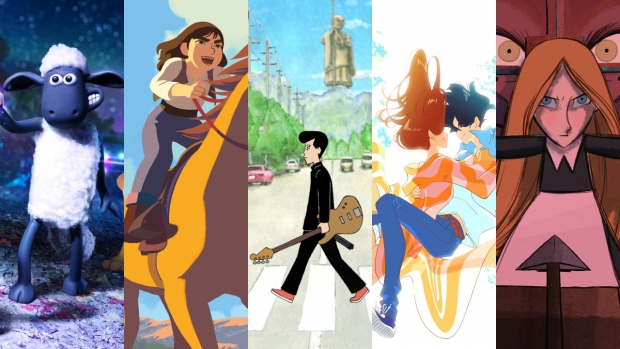 With awards season in full swing (or what passes for full swing in our new pandemic reality), the 48th Annie Awards will take place in virtual form on April 16, 2021. While the absence of a live event for this high point of the animation calendar will be a significant letdown for many, one advantage, as ASIFA-Hollywood president Jerry Beck pointed out, is that international members of the organization will have the opportunity to be present (more or less) for the first time.

Forthwith, a look at the five films that have been nominated for Best Indie Feature: A Shaun the Sheep Movie: Farmageddon
Aardman Animations and Studiocanal in association with Anton Capital Entertainment - An Aardman Production for Netflix
Directed by Richard Phelan and Will Becher

Directed by Richard Phelan and Will Becher (in their feature directorial debuts) and written by Mark Burton and Jon Brown, this stop-motion / 3DCG animated sequel to the immensely popular Shaun the Sheep Movie (2015) (itself an offshoot of the Shaun the Sheep TV series, which spun off from the immensely popular Oscar-winning 1995 Wallace & Gromit short, A Close Shave) features the inimitable dry comedy and impeccable timing that characterized its predecessors. When an adorable alien with astonishing abilities crash lands near Mossy Bottom Farm, Shaun and his flockmates must find a way to get her home, while keeping her safe from the Ministry for Alien Detection.

Plans for the sequel began shortly after the release of the first Shaun film, with co-director Richard Starzak slated to direct. However, in November 2018, in conjunction with majority ownership of the studio being transferred to employees, it was announced that Farmageddon would be directed by Becher and Phelan. Pre-production began in early 2017 and principal photography was completed in June 2019. The film premiered in Germany in September of that year, followed by its release in the U.K. the next month. It was released digitally in the U.S. by Netflix on February 14, 2020.

In addition to its Annie nomination, Farmageddon has received both BAFTA and Academy Award nominations as best animated feature.

The film is currently streaming on Netflix. You can find the film’s official website here.

One Giant Leap for Sheepkind: ‘A Shaun the Sheep Movie: Farmageddon’

Like director Rémi Chayé’s previous feature Long Way North, Calamity Jane, which won the Cristal Award for Best Feature Film at the 2020 Annecy Festival, has a strong, determined woman at its center – in this case, the legendary American frontierswoman who defied the gender conventions of her time. Beginning in 1863, the French-language 2D animation chronicles Martha Jane Cannery’s journey with her family to Oregon, and the conflicts and adventures that ensue when the young girl’s father is injured and she has to take over for him.

The production of the 2D film, which has been lauded for its minimalist visual style and painterly qualities, required considerable research, especially in terms of sorting out truth from legend in the life of its subject. The three writers – Rémi Chayé, Sandra Tosello, and Fabrice de Costil – worked on the screenplay for two years, and another year was devoted to storyboarding and animatics. Prior to its screening at Annecy, Calamity Jane had a limited release in France, and it had its U.S. premiere at the FIAF Animation First Film Festival on February 5, 2021.

Calamity Jane has also been nominated for a French César Award, among other honors. Adapted by writer-director Kenji Iwaisawa from the manga by Hiroyuki Ohashi, On-Gaku: Our Sound is the story of a trio of high school delinquents, who, despite having no musical skill, decide to form a band – because, you know, why not? While there are some other plot complications involving a rival gang, a local rock festival, and a seemingly normal girl who somehow manages to be a friend to the unreconstructed slackers, mostly On-Gaku: Our Sound, which features Japanese alt-rock legend Shintaro Sakamoto, is a paean to rock and roll and the joys of music.

Supported in part by a crowdfund started by Ohashi in 2012, Iwaisawa’s debut feature was largely hand-drawn by the director, who used rotoscoping to capture the action. Not surprisingly, given his hands-on approach and the fact that his small crew was relatively inexperienced, the film took seven years to make. On-Gaku: Our Sound had its initial release on January 11, 2020 in Japan.

Previously, On-Gaku: Our Sound won the Grand Prize at the Ottawa International Animation Festival and received the award for Best Original Music for a Feature Film at Annecy. Described by director Masaaki Yuasa (The Night Is Short, Walk on Girl; Lu Over the Wall) as a "simple romantic comedy" with “a lot of exciting scenes,” clearly there’s a lot more going on in this anime feature about Hinako, a surf-loving college student, who’s devastated when her new firefighter boyfriend dies in a surfing accident. When she discovers that she can bring him back by singing “their” song ("Brand New Story" by Generations from Exile Tribe), it paves the way for a journey of healing and self-discovery.

First announced at the Tokyo International Film Festival in 2018, the 2D Ride Your Wave was released in Japan on June 21, 2019. The film premiered in the U.K. at Scotland Loves Anime in October 2019, and was released theatrically in North America by GKIDS in February 2020. A music video featuring new scenes from the film and a two-chapter manga adaptation by Machi Kiachi were also produced in support of Ride Your Wave.

A multiple nominee for best animated film, Ride Your Wave won the top prize for animation at the Shanghai International Film Festival.

Review: ‘Ride Your Wave’ - Love, Loss, and Awkwardness on the Beach

The film is available on Blu-ray and DVD via the GKIDS website and streaming on HBO Max, YouTube, Google Play, Vudu, and Apple TV. You can find the film’s official website here. Directed by Tomm Moore and Ross Stewart, Wolfwalkers is the final installment in Moore's "Irish Folklore Trilogy," following The Secret of Kells (2009) and Song of the Sea (2014). In a time of superstition and magic, when wolves are seen as demonic, Robyn, a young apprentice hunter comes to Ireland with her father to wipe out the last pack. But when she saves and befriends a native girl, Robyn makes a discovery that changes everything.

Mixing 2D and 3DCG, and acclaimed both for its storytelling and evocative visual style, which is influenced by woodblock prints, medieval tapestries, and other traditional art forms, Wolfwalkers had its world premiere at the Toronto International Film Festival on September 12, 2020. It was released theatrically in October in the U.K. and in November by GKIDS in the U.S. and Canada, and debuted on Apple TV+ on December 11, 2020.

In addition to being nominated for a BAFTA Award, Golden Globe, and Academy Award, Wolfwalkers was named best animated film by a slew of critics’ associations, including New York, Boston, Chicago, Los Angeles, Seattle, and Toronto.

The film is now streaming on Apple TV. You can find the film's official website here.

‘Natural Habitat Shorts’: Like ‘Ranger Rick,’ But for Adults
Framestore Sets Sail on ‘1899’ with New Virtual Production Tools
Animated Characters: The Art of Babbitt – Part 1
Bruce Smith and Ralph Farquhar Talk ‘The Proud Family: Louder and Prouder’ Season 2
VFX is the ‘Thing’ for Tom Turnbull on Tim Burton’s ‘Wednesday’
We Need to Chat
Choc Chip Animation Riffs on Pop Culture in ‘The Art of Murder’
F is for Flake: The (Not So) Great Animation Robbery?
END_OF_DOCUMENT_TOKEN_TO_BE_REPLACED