Every Monday, Chris Robinson serves up Animators Unearthed, a brief introduction to prominent and not-so-prominent indie animators. This week's focus is the influential Swedish studio, Filmtecknarna. 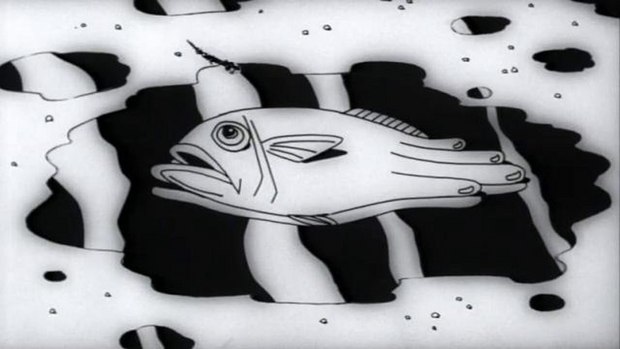 Formed in 1981 by Jonas Odell, Stig Berqvist, and Lars Ollson, the Swedish animation studio, Filmtecknarna quickly developed into one of the most respected and innovative animation companies in the world. Long before the digital revolution, Filmtecknarna merged a low and high end mixed media aesthetic to produce a visually exciting body of work that included award-winning commercials for a variety of clients (Madonna’s Music video, Boddington’s Cream Ale, MTV, Cartoon Network) along with a unique body of personal films (Revolver, Exit) that received wide acclaim from international film festivals.

One of the studios’ first films to receive international acclaim was Exit (1989). This was the first film written by the studio and it had two starting points. One was a nightmare that Berqvist had about a bizarre amusement park/department store. The second was a story told by Dawning writer, Joakim Pirinen. “Joakim told us about the trip he made to Berlin.” says Odell “ When you enter East Berlin you had to exchange a certain sum of money into East German marks but you weren’t allowed to bring them out of the country.” Law abiding as he was, he desperately tries to spend the money on what there was to buy (i.e. Cheap souvenirs and nylon socks). This developed into a satire on the entertainment industry and the desperate race to have a ‘good time’.

One of the subtle achievements of Exit is its deceptively simple design, which is more aligned with classical animation (like Dawning and The Man Who Thought with his Hat) than with the more expressionist design of Revolver, Otto, and Body Parts. Initially, one laments the lack of stylish graphic design until you understand the consciously alluring effect of the ‘cartoony’ nature of Exit.

Filmtecknarna’s most famous production is Revolver (1993), a dazzling black and white film with a bold graphic style and a striking minimalist score.  Revolver is comprised of a series of disparate repeated images that flow to the rhythm of a nightmare. In the end, Revolver can be read in a variety of ways or merely savoured for its formal aural and graphic beauty.