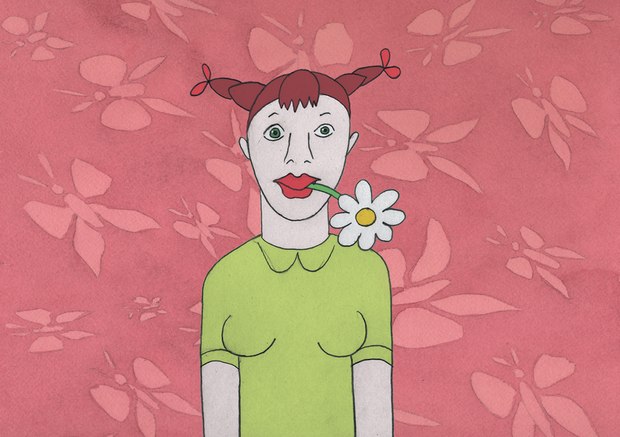 I’m certainly generalizing here but I suspect that when many people think of women’s film, they might think of goddesses, nature, cats, flowers and pastels. Female protagonists as gentle, almost virginal beings who face the daily task of fending off evil lecherous men. If they have been corrupted, it is usually the fault of a man.

What a crock of shit.

Anyone who has seen indie animation films by, for example, Suzan Pitt, Ruth Lingford, Michele Cournoyer, Joanna Quinn or Signe Baumane, knows such antiquated perspectives belong around back, just about where they store that very same crock.

"Birth" from Signe Baumane on Vimeo.

It’s a bit extreme to call Baumane the female Charles Bukowski, but her work is certainly closer to his than it is to the work of many of female colleagues. In much of Bukowski’s work, it is an aggressive, primitive, often beastly male sexuality that drives many of the stories. In Baumane’s work it is the reverse. From Witch and Cow (1991) through to Woman (2002), Teat Beat of Sex  (2007) and even her recent feature, Rocks in My Pockets (2014), the woman is the aggressor. These are women with powerful desires and like tanks they will let nothing stand in the way of fulfilling that urge. Men, who have been nurtured and conditioned to think of themselves as the hunter, are often scared of this power. It’s a threat to the so-called rules of masculinity. Baumane does not buy into the myth that women are somehow purer and more innocent than men, that they are magically connected with nature, that men are the evil and violent ones. “Men and women in essence are the same,” says Baumane. “Why is such a big deal made out of the gender? Gender sometimes is exciting when it comes to sex but it’s not so important when it comes to doing dishes or feeling lonely.”

"Teat Beat of Sex" Episodes 1-3 from Signe Baumane on Vimeo.

Tags
Short Films
animated short films
2D
Signe Baumane
Women Animators
Rocks in My Pocket
Latvia
Feature Animation
More From ANIMATIONWorld:
Next Post
Pictures from the Brainbox: A Weekly Dose of Indie Animation - 'On the Other Side of the Woods'Previous Post
Cheer and Loathing in Animation: Episode VII - Non-Absorbing?
Related Content
Animators Unearthed - Yoriko Mizushiri
The Animation Pimpcast #12: One on One with Signe Baumane