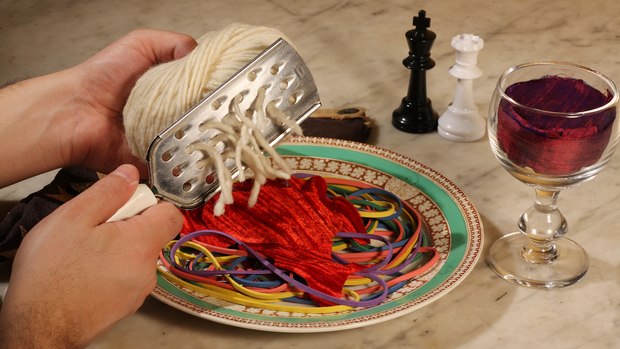 Okay, first things first. What’s with the PES name? With the exception of Dutch animator Rosto A.D., there aren’t many animators around using nicknames.  Animators are for the most part a pretty low-key group of folks. “Pes is a family nickname.  It comes from my last name, Pesapane [his first name is Adam], which Americans have a terrible time pronouncing or writing correctly.  I once received mail addressed to "Propane".   It's just easier this way -- PES.... except in a noisy bar, where people tend to hear the word PISS.”

And no, it ain’t after the candy. That’s Pez. This is PES (rhymes with Les, as in Les Nessman from WKRP in Cincinnati). Still, the thing is that PES’s work is very much like candy, or eye candy. The New York animator sticks out from the crowd with strikingly original and playful stop-motion works that use everyday objects and put them in an entirely new context (e.g. in PES’s The Fireplace – the world’s first animated Instant TV fireplace, he uses pretzels and candy corn to create a roaring fake fire for those cold nights in your fireless home). All the more impressive is the fact that, like Aaron Augenblick, PES has managed to successfully straddle that rambunctious border of commercial and independent work without giving up his artistic identity.

PES’ work reminds me of hanging out with my kids. They’re juvenile, childish, magical, fun, repetitive, intelligent, perceptive, stupid, cute, vicious and silly. I wouldn’t want it any other way. Sadly, the kids will grow up. Let’s hope that PES doesn't.