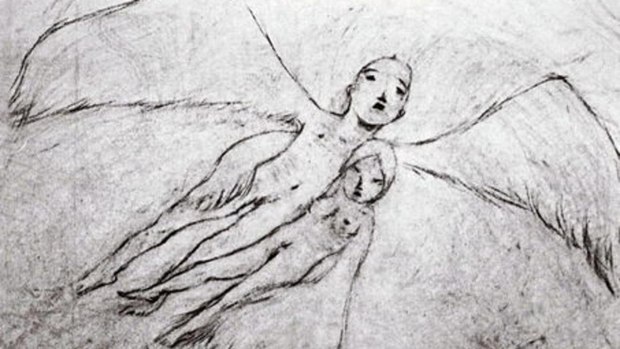 'A Feather Stare at the Dark' by Naoyuki Tsuji

Naoyuki Tsuji’s work has everything I like about the best animation. It’s primitive and kinda ugly but not in some accidental sloppy way. This guy knows what he’s doing, sorta like he’s frantically scribbling to try and keep up with the world. As he draws one conclusion, another immediately appears and on it goes. Yet as he keeps going forward, shadows of what he has learned remain, they are never entirely forgotten. They move forward with each new bit of knowledge.

Tjusi’s drawings style look like a kid’s. Quickly, defenders of ART race to clarify that in fact Tjusi’s work is anything BUT childish. Nonsense says me. Such an insult to the kids (our future). I have kids. They sometimes see the world in a clearer and more profound way than most of us so called adults. His scribbles and thoughts are as simple, profound and stupid as any kid’s doodles.

Tjusi’s got rhythm too, not of the Fred and Ginger variety, it’s more a  “swing of the earth” feel. Characters move about awkwardly, cautiously, to and fro without control. It’s sort of an Albert Ayler kinda (anti) groove. Tsuji’s just looking down at that paper and making up the notes with each touch push and shove of the charcoal. It’s that attempt at real-time simulation that grounds the work, keeps it from getting too precious. Instead it feels like life, like a guy who craps like me and you. Some of the images are logical, pleasing and insightful, others are just plain surprising, painful and ridiculous. It’s like seeing the highs and lows of a naked man, naughty bits and all.

Breathing cloud. Cloud grows. Mountains fade. Shadows remain. Cloud expands to take over the whole frame. Forms a hand, then faces. Kids snort clouds, get naked and have a ball. A couple make love, then child, then they close their eyes and fade into the cloud. Tjusi never lets us forget that the universe and the STUFF of us is transient and fragile. Here today, gone tomorrow. But it isnt so bad for Tsuji. He embraces and relishes the uncertainty of our blip of an existence. Man woman boy birds devils clouds dicks death. All part of the same volcano (“flesh quakes”) of this thing we call living.

Tjusi’s embrace of - even enthusiasm for - the unknown keeps us calm. Unlike the overwhelming chaos of Ayler’s often piercing, violent sounds, you feel somehow at ease in Tjusi’s world. There is something comforting about the chaos. No matter how far into wackyland it strays, you always feel connected. Nothing ever engulfs you as you pass through the torn formations of the shadow ghosts from was and were.

Unpacking ‘The Croods: A New Age’ Character Animation
How Deep Sky Created The Smashing Pumpkins’ ‘In Ashes’ Music Video Series
Designing the Illusory: Souls, Counselors, and The Great Before of ‘Soul’
Chicken Bone FX Makes All the Right Moves in ‘The Queen’s Gambit’
Cinzia Angelini's 'Mila' Gives an Animated Voice to Children of War
Eep, Grug, and Gran Are Back in DreamWorks Animation’s ‘The Croods: A New Age’
A Couple Faces the Pain of Unspoken Grief in ‘If Anything Happens I Love You’
Chiodo Bros’ ‘Alien Xmas’ Joins the Pantheon of Stop-Motion Holiday Classics
END_OF_DOCUMENT_TOKEN_TO_BE_REPLACED