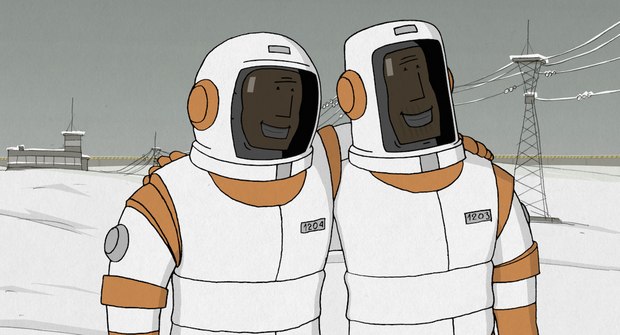 'We Can't Live Without Cosmos' by Konstantin Bronzit

Long before he made his widely beloved We Can’t Live Without Cosmos (2015), Russian animator, Konstantin Bronzit had already churned out a few animation classics.

Farewell (1993) and Pacifier (1994) were Bronzit’s first films for the famous Pilot Animation school (where Igor Kovalyov worked).  “At that time I was keen on a caricature in newspapers and magazines. It taught me to think quickly, contrive laughable situations, and make gags. These types of films are typical for the director who is just starting out – funny and without claim to be treated as ‘the serious art’. Evidently, those caricatures influenced my first films.”

Switchcraft (1994) recounts a rather bizarre evening experienced by a man and his cat as they try to sleep. “Switchcraft came up from a caricature,” says Bronzit. “The person had put a mousetrap in front of a hole in the wall of his room. There is a shot glass of vodka as bait for the mousetrap.  The walls of this room are decorated with trophies in the form of human hands precisely holding the same shot glasses. Although the plot of the film is about something totally different, an empty room with a lonely person and a mousetrap led me to the film.”

At the Ends of the Earth (1999) was produced by France’s acclaimed, Folimage studio. Bronzit made the film while doing an artist-in-residence. “By that time it was almost impossible to get funding for production in Russia. The storyboards of the film had been stored at the Pilot Studios for about a year. Suddenly, I received an invitation from the Folimage Studio to submit any of my work for the competition. I thought - why not? I sent Ends of the Earth, won the competition and went to France to make the movie.

In this impeccably timed comedy, an old Russian couple live with their cat, dog, and cow, in a small house that just happens to be located on the tip of a big mountain. “At the beginning there was a small house on the peak of the mountain,” says Bronzit about the film’s origins. “But the small house is not a script yet. I intuitively felt the comic opportunities concealed in this situation. The script was developed slowly, step by step. First there appeared a woman with the cow and a dog, and then the story fleshed out in my head.”

Although Bronzit denies that he has a familiar ‘style’, the one constant throughout is his masterful comic timing. “For me this subject is special,” says Bronzit. “I already had it within me long before I understood its precise meaning. Hardly understanding how to make a movie, I conceived The Round About. The years passed, I made some more films and when I got to Pilot I heard this strange word ‘timing’. Everyone repeated it over and over again ‘timing, timing’, but nobody could explain to me or tell me what this means in a movie. Now I wonder how have I made my movies? Probably, I just had inner flair.”