Every Monday, Chris Robinson serves up Animators Unearthed, a brief introduction to prominent and not-so-prominent indie animators. Today's featured animator is Koji Yamamura, whose work is being celebrated this week at Animafest Cyprus. 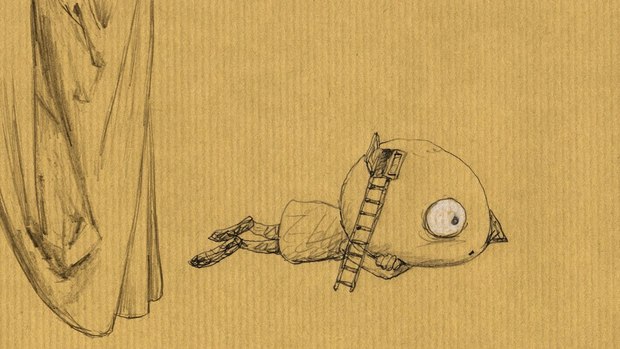 'A Child's Metaphysics' by Koji Yamamura

Koji Yamamura’s films are a bit like chameleons. Each of his films looks different from the previous one, yet there can be doubt that the films are his. While his early films – primarily aimed at children - celebrated the magnificence of the mundane, the beauty of the moment, his later films explore a more complex world featuring morally confused protagonists struggling to locate their place and purpose in a harsh cold and chaotic environment.  There is a restlessness throughout these later films as self-centered characters fecklessly roam through fleeting landscapes, passersby unable to connect with their fellow travelers.

In Atama Yama (2002), this stingy man lives not as an echo, but as a shadow. He is surrounded by garbage, a rubbishy ramification that staves off the threshold of despair. He wastes nothing. He shares nothing. He enjoys nothing.  Cherries are shoved into his mouth untasted.

The Old Crocodile (2005) makes choices based solely on self-preservation. He will destroy family and friends in order to survive. In the end he is rewarded, but at a high price.

In Yamamura’s masterpiece, Kafka’s A Country Doctor (2007), a burned-out and cynical doctor has lost faith in the world and in himself. Existence has overwhelmed overwhelmed him. No longer busy being born, the old doctor is too busy dying.

Even in the overlooked and somewhat lighter, A Child’s Metaphysics (2007), Yamamura looks at the craziness of childhood, where blossoming minds souls and bodies are constantly shifting, expanding, and adapting to each new greeting moment.

Muybridge’s Strings (2011) – which might also be a summary of all of Yamamura’s work - captures the tragedy of time passing, of watching a child grow up and being powerless against it.

Yamamura’s characters – like, well, all of us - are strung together in a single book trying to create their own verse before the page turns. All we can really do – as Yamamura’s work suggests -  is sample and savour each fleeting moment before turning the page.

Animated Characters: The Art of Babbitt – Part 1
Bruce Smith and Ralph Farquhar Talk ‘The Proud Family: Louder and Prouder’ Season 2
VFX is the ‘Thing’ for Tom Turnbull on Tim Burton’s ‘Wednesday’
We Need to Chat
Choc Chip Animation Riffs on Pop Culture in ‘The Art of Murder’
F is for Flake: The (Not So) Great Animation Robbery?
Re-VIEW: ‘Avatar: The Way of Water’ – A Miraculous Vision
‘Kung Fu Panda: The Dragon Knight’ Celebrates a Special Lunar New Year
END_OF_DOCUMENT_TOKEN_TO_BE_REPLACED