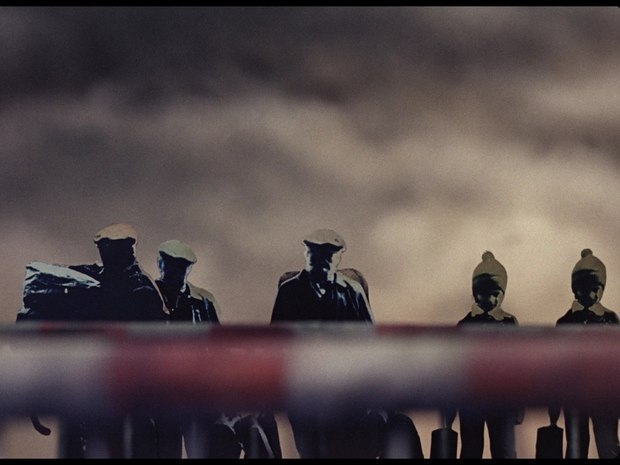 Watching the films of popular Polish animator, Jerzy Kucia, is like, bear with me, sitting on, say, a train. You’re casually looking out the window. You see the landscapes and objects and people flickering by, but you’re not really consciously taking it all in…well sometimes you’re looking, but mostly you look out as your mind is looking at another time and place, either reflecting or remembering.

Kucia’s work seems to capture and fuse those outer and inner landscapes. You’re never quite sure if you’re watching a present event or blurry recollection.  His entire body of work feels interconnected, like chapters of a novel… they flow in and out of each other, constantly skirting between then and now. Images, people, landscapes and sounds pass by momentarily; sparkles of a fused confused times, scattered incomplete memories, like faded, shorn photographs.

A common theme in Kucia’s films is the tenuous connection between humanity and nature. We see people in nature, working (in Parade, the tools of the harvest become musical instruments), resting, loving, destroying (see Reflection, 1979).  You’re never entire sure what’s going on, and that’s okay, because that pretty much nails the essence of our individual lives. We’re all just passing by, passing through, along the way we’re temporarily tattooed with fragments of light, colour, sounds, images that are gone before we’re even sure they were there. Kucia’s films are cryptic, hypnotic, annoying, repetitive, tedious, astonishing, and beautiful…much like our daily experiences. His films, as cornball as truth can sound - remind us that life, being, and living, well, it’s not about the destination, it’s about the kick of the moment, the buzz of the ride.

An Interview with Priit Pärn
‘Baymax!’ Provides an Rx for Humor and Compassion
How Digital Domain Brought Photoreal Characters to Life in ‘The Quarry’
SCAD GamingFest: Building Shared Story Experiences with Diverse Character Design
Mission Critical: ‘Lightyear’s Journey to Infinity and Beyond
Putting the Fun in Dysfunction: The Non-Humanistic Therapy of ‘HouseBroken’
‘The Freak Brothers’: This is Your Humor on Drugs
END_OF_DOCUMENT_TOKEN_TO_BE_REPLACED