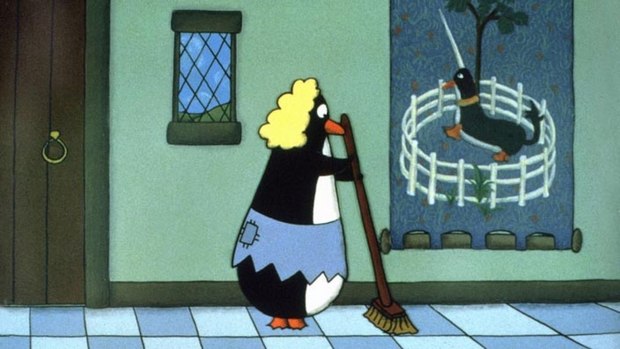 Janet Perlman's work exceeds at being thoroughly fun yet thought provoking.  She's famously penguinized a number of children's tales including the Oscar nominated short The Tender Tale of Cinderella Penguin (1981).  She's used a lobster invasion to explain the importance of clarity, stick figures to raise the issue of bullying and chameleons to discuss problem solving.  Sometimes, in the case of My Favorite Things That I Love (1994), her work is pure entertainment.

Why Me? (co-directed with Derek Lamb, 1978) is a remarkable work of art that exemplifies what the NFB does so well: create timeless films that are both educative and personal. In telling the story of Nesbitt Spoon, an average Joe who finds out that he has only minutes to live, Lamb and Perlman seamlessly blend comedy and tragedy. There is also a self-reflexive level that echoes Duck Amuck and foreshadows Chris Landreth’s The End. Nesbitt Spoon, the character, will actually die as soon as the film ends.

Why Me? also contains some remarkable acting (another trademark of Lamb’s period at the NFB) that made Perlman’s life a bit easier. “It was my first all lip sync film. The film was easy for me because of the great performances. I wasn't at the recordings, and so I was not influenced by the visual performance, which I think for this film was a liberating thing. The key to this was working with the track on tape right beside my animation table. I played it constantly to accurately interpret the performance.”

The Tender Tale of Cinderella Penguin, Janet Perlman, provided by the National Film Board of Canada

The idea for the Tender Tale of Cinderella Penguin (1981) also started as a reaction to Disney films. “I don't like the automatic pairing of virtue and beauty in fairy tales and Disney films. I have never had a desire to do that kind of animation. Disney would have put penguins in Antarctica.  I kept them in medieval England. Penguins are perfect for Cinderella because she was beautiful and good, while her sisters were ugly and bad. If everyone was a penguin and then they'd all be just birds.”

My Favorite Things That I Love from Janet Perlman on Vimeo.

My Favourite Things that I Love (1994) is an improv session of unabashed pleasure, beauty and ugliness. It’s one big ‘fuck it all’ film where Perlman dumps everything on the table and says, “Hey, this is my life, this is who I am, this is what I like.”