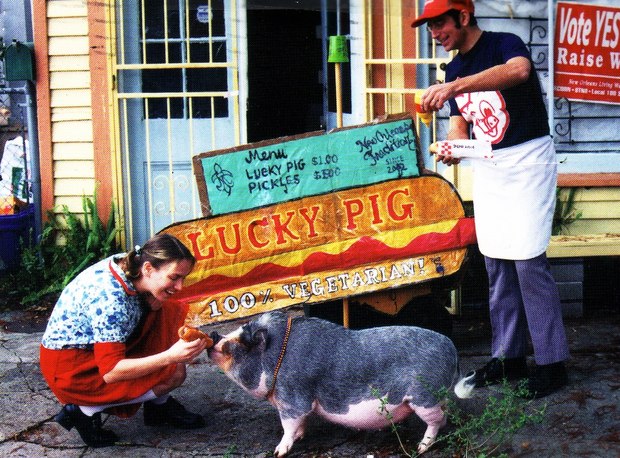 It’s been just over ten years since animator Helen Hill was murdered in her New Orleans home on January 4, 2007 (the case, so far as I know, remains unsolved). Her husband, Paul Guilianas and their then 2-year-old son, Frances Pop, survived the attack (likely drug related). There have been many tributes to Helen over the years (even an episode of the HBO series, Treme included a storyline about her murder). Most recently, Helen’s films have been released online. Helen was someone I had great admiration for. She was optimistic, energetic, supportive, communal, giving. She also had a pet pig. It’s not easy to be an optimistic person on most days. It requires discipline and passion and dedication and love. It requires a commitment to life, to people, to community. It’s a hell of a lot easier to be cynical, judgemental and whiny. Just ask me.

Given today’s chaos, I can’t help but wonder how Helen would react. I suspect she’d just be the same fierce doer and fighter and that somehow she’d find the lining in this current shitstorm. Mouseholes (1999) remains a film close to my heart. I believe the OIAF was the only major animation festival to show it. I’m proud of that. Unlike so much technically proficient animation, Mouseholes has a soul. It’s sloppy, honest, urgent and personal. That’s what makes it and her so special and so unique. If only more animators embraced that same fearless spirit. In a sense, Helen Hill was a true punk, fighting the fight with compassion, love and selflessness. Her films are the epitome of DIY art: defiantly flawed, raw and real. She didn’t make films to appease funders or festivals. She didn’t sit on her rump waiting for someone to give her money. When Helen had something to say, she said it.

How ‘Luck’ Applies a ‘Less is More’ Approach to Comedy
Z is for Zagreb: The Animafest Zagreb Exhbition 1972-2022
Dude! - ‘Rise of the Teenage Mutant Ninja Turtles: The Movie’ Arrives
‘Super Giant Robot Brothers’: A Milestone in Virtual Animation Production
‘Luck’ Aims to Bring Hope to Kids In and Out of Foster Care
Pre, Tech, and Post: The Many ‘Vizings’ of ‘Chip ‘n Dale: Rescue Rangers’
Hammering Out the VFX in ‘Thor: Love and Thunder’
END_OF_DOCUMENT_TOKEN_TO_BE_REPLACED