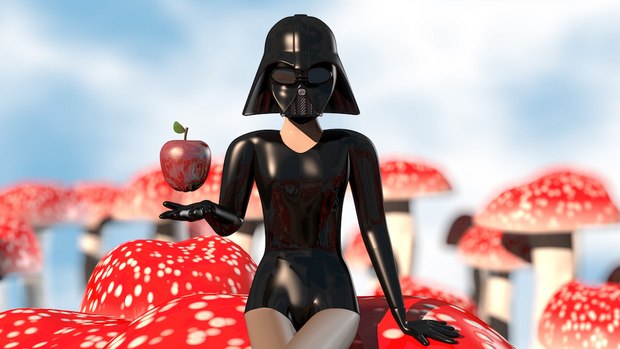 Here’s a great example of just how full of shit or naïve or maybe stupid I can sometimes be. I’ve always tried to champion films that had interesting, strong ideas/concepts no matter how pretty or beastly they look. I’ve never said that looks don’t matter, but at the end of the day, if there aint no soul, the work - no matter how well made – will eventually fade from memory into those cultural dustbins of history. To be fair, there are also some films that are such conceptually convoluted wankfests that it can feel like the audience is an afterthought.

Having said that… it’s entirely conceivable – given that the OIAF (the festival where I work when I’m not here educating you kids) hasn’t accepted his films - that I dropped the ball with the work of autodidact animator, Faiyaz Jafri.

With animation (especially commercial 3D animation and motion capture) often veering unhealthily towards a faux/hyper-realism along with its frequent obsession with craft and technique (over concept), Jafri’s work (influenced, in part, by Carl Jung) is a refreshing rejection of such longstanding animation tendencies.  With its unhurried pace, plastic sheen, minimalist computer graphics, and a deliberately defiant narrative littered with an assortment of pop culture archetypes (or what Jafri calls “neo-archetypes” which he describes as “pop references of mass media and global popular culture used as a visual shorthand.”),  Jafri's films (I Love Bambi, 2011, Baby I Love You, 2012, This Ain't Disneyland, 2015) almost feel like anti-animations (he describes them as "hyper-unrealism").

Jafri’s animations are hypnotic explorations through subconscious minds saturated with nothing but distorted pop culture icons. Perhaps this is what it looks like inside the minds of those who stayed in Plato’s cave a little too long.

Whatever your interpretation of Jafri’s challenging and inspired work, it’s brazenly distinct from almost anything else being made in the indie animation circuit today. And that is a very good and healthy thing.

Baby, I Love You. from Faiyaz Jafri on Vimeo.