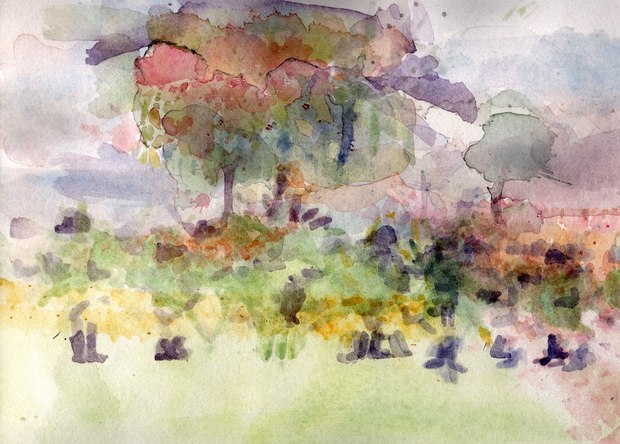 Elizabeth Hobbs is one of the most imaginative, energetic and perhaps underappreciated indie animators around today. Hobb’s films (including The Emperor, The Old, Old, Very Old Man, The True Story of Sawney Beane and the most recent, G-Aaah) are notable for the unusual techniques that range from ink on bathroom tile, typewriters, watercolour on paper, butterfly prints, and rubber stamps). If there is a constant throughout her work, it’s the playful proclivity for unusual - yet true - periods in history that touch on witches, vampires, cannibals, Napoleon’s penis and a really, really, really, old guy). The blurred, hurried, transient feel of her films aptly reflects the mysterious haziness of her quirky historical subjects; as though we’re squinting at faint memories struggling to take shape, find form and become, before vanishing as rapidly as they appeared.

The Emperor from Lizzy Hobbs on Vimeo.

Prior to working in animation, Hobbs made book and prints.  “They had little narratives,” Hobbs says. “but I found that I wanted the narrative to unfold in a certain way that couldn’t be conveyed upon the page, it was about timing and hearing the narrative in a certain voice. So I contacted a lovely friend called Scott Ward, who helped to find someone to set me up with a camera in a dark room for a couple of days, which led to my first film, a rude film in fuzzy felt.” Happy with the results, Hobbs closed the books and carried on with animation.

While her subjects are rooted in factual historical events, Hobbs’s creative process is bit more freewheeling: “I never quite know what’s going to happen when I sit under the rostrum or start working with my materials, so the work unfolds in the making and there’s no compositing or alteration of the work after that, because I like the films to be a true reflection of what I tried to do with the materials. I work very fast, and at the moment I tend to make a little plan, see what happens, re-shoot, see what happened, re-shoot many times, make a rough edit, then re-shoot the whole lot. I hope that the films are as exciting to watch as they are to make.”

The Massive Creative Fellowship Behind ‘The Lord of the Rings: The Rings of Power’
‘The Dragon Prince’ Director Villads Spangsberg Talks Toonlines and Tough Challenges
Laurence Fishburne and Steve Loter Talk ‘Marvel’s Moon Girl and Devil Dinosaur’
Taking an Old-School VFX Approach in ‘All Quiet on the Western Front’
‘Natural Habitat Shorts’: Like ‘Ranger Rick,’ But for Adults
Framestore Sets Sail on ‘1899’ with New Virtual Production Tools
VFX is the ‘Thing’ for Tom Turnbull on Tim Burton’s ‘Wednesday’
We Need to Chat
END_OF_DOCUMENT_TOKEN_TO_BE_REPLACED