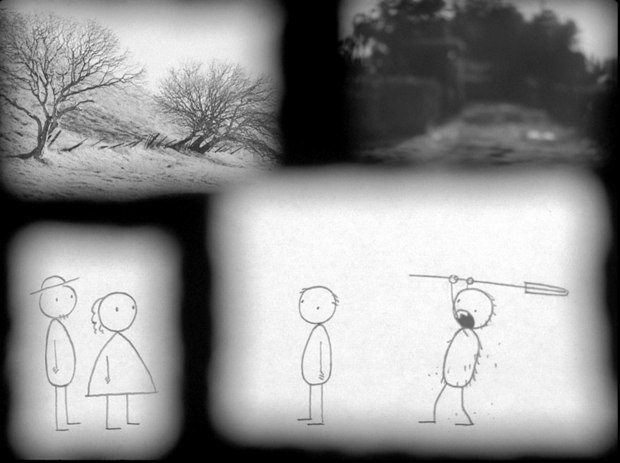 American animator and Oscar nominee Don Hertzfeldt (Billy’s Balloon, Rejected, The Meaning of Life) has been firing out an impressive body of work since the mid 1990s. Don’t be deceived by his minimalist, stick-figure drawing style and comic tones: his work lays bare a rage of existence and madness that creeps and crawls within us. There are times when it howls to be unleashed upon the world, and times when it spurts out in a small shout, a dirty look or a middle finger.

Lily and Jim (1997) captures the often painful and tedious experience of dating. Throughout the date, the couple struggle to come up with something to talk about. At one point, ala Annie Hall, thought bubbles reveal what they’re really thinking during their conversations. In the end, despite having a relatively lame date (aside from Jim having to be taken to the hospital after he suffers an allergic reaction to coffee), Lily and Jim tell the audience/interviewer that they wanted to see each other again. However, their insecurities and false bravado ensure that it never happens. They remain alone.

Billy’s Balloon (1998) shouldn’t work, but it does because the violence is so utterly absurd that you can’t help but laugh.  “I remember it partially coming out of a dream about a boy in a field who begins to fly, Hertzfeldt recalls. "I think I produced it relatively fast, maybe in 9 months. I originally had a dumb sort of punchline gag for the ending and quickly decided against it. Otherwise I think it was pretty straightforward and didn't change drastically from start to finish."

The Meaning of Life (2005) is unlike anything Herztfeldt had made before: a personal, playful and poignant take on the meaning of life. Starting with the evolution of man, Herztfeldt takes us through a world of babbling humans, aliens and, finally, a father and son alien. The creatures and their words come and go, but the one thing that remains constant is the beauty and mystery of stars and suns of the universe. The ultimate irony is that the eternal human question: “what is the meaning of life” cannot be answered in words.