Every Monday, Chris Robinson serves up Animators Unearthed, a brief introduction to prominent and not-so-prominent indie animators. This week he takes a look at Chicago animator Chris Sullivan. 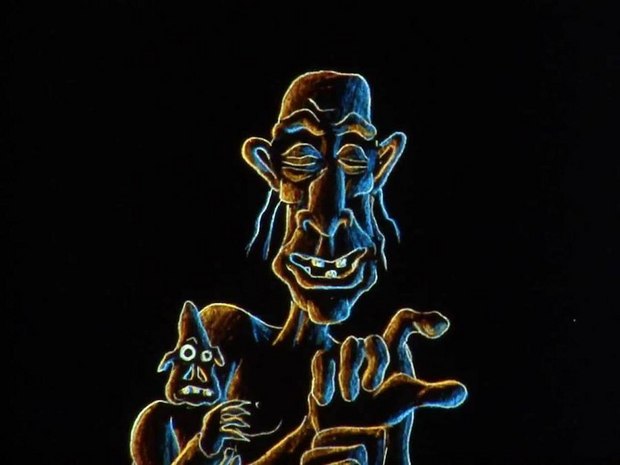 If animation has an answer to the great writer, Hubert Selby Jr. (author of such fine novels as “Last Exit to Brooklyn,” “Requium for a Dream,” “The Room”) it’s Chicago animator, Chris Sullivan. Like Selby, Sullivan -- through films such as Master of Ceremonies (1987), Landscape with the Fall of Icarus (1992), and his extraordinary feature, Consuming Spirits (2012) -- shows us the world as it is, not how we imagine it to be. One that is neither heroic or beautiful, nor exceptionally ugly or evil.

This is not your typical animation world of animals, dick jokes, or abstract non-figurative symbolic blah blah blahs about wallowing artists. Sullivan’s working class characters struggle daily against poverty, abuse, death, madness, want and despair. But Sullivan is no preacher or social activist.  His blunt, bare and unpretentious films aim, not to shock, but to engage us, to simply show us a world that most of us deny living in.

In Master of Ceremonies, a house burns to the ground and the occupants perish. As the dying transform into spirits, the voices of the house resonate. Before they head to wherever it is spirits go, death decides to put on a nice little vaudeville show to cheer up the recently dead. On one level Master of Ceremonies is a film about the cruelty of death. Death doesn’t care. It takes what it wants, when it wants. On another, this is a film about the death of the past, about how life moves on with or without us. Only in death do we truly silence ourselves. Inspired by the Bruegel painting, Sullivan spent five years making Landscape with the Fall of Icarus. In Sullivan’s version, Icarus becomes Ray, an aging preacher whose congregation is dwindling as fast as his sanity. As Ray’s condition deteriorates, society fails to notice or care. In the end, Ray finds solace in a bar singing hymns about “weaving footprints through the snow.” Around him are figures from the nightmares that have tormented him. They no longer bother him here. He is at peace. The bar becomes a new church for Ray, a sanctuary. When Ray leaves the bar in the film’s final shot, he has become invisible except for his footprints. Outside of his safe haven he becomes that “splash quite unnoticed.” A decade in the making, Sullivan’s Consuming Spirits focuses primarily on three characters: Earl, Genny, and Victor. Earl hosts a late night radio show on gardening where he frequently escapes into musings on existence and morality. Genny drives a bus and takes care of her ailing, foul mouthed mother. Feckless Victor works for a newspapers and struggles with alcohol addiction. The three characters don't realize that they all connected by mysterious events from their past.

Despite making some of the most honest, potent and thoughtful animated films, Sullivan remains a somewhat marginalized figure even within the supposedly progressive and edgy indie animation scene. Sullivan’s films are perhaps too raw, real and ugly for the precious tastes of animation “connoisseurs.” It’s a shame for him, and us.