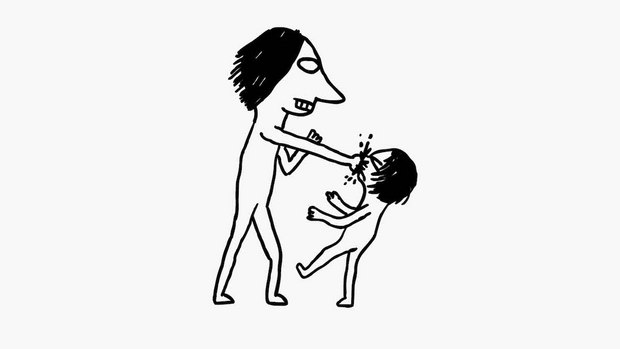 British animator, Chris Shepherd has directed three of the most striking and original animation works of the last couple of decades: the deliciously dark Dad’s Dead  (2003); Who I Am and What I Want (2005), a hilarious and disturbing scribble film about a fucked up guy in denial named Pete -made in collaboration with Scottish artist, David Shrigley - and Silence is Golden (2006), a live-action/animation hybrid about a young boy, his boozer mom and their crazy old neighbour.

Dad’s Dead is a rarity in animation. Here’s an aggressive, urban film telling real stories about flawed people living a dirty, vile existence. Shepherd’s film is planets away from Pixar. The fusion of live-action and animation gives the film a unique, disturbing look, capturing the distorted nature of memory.

Who I Am and What I Want from chris shepherd on Vimeo.

The idea of collaborating with Shrigley began in 1998 when Shepherd was working on the British sketch TV show, Big Train. “I read a book by David called “Why we got the sack from the museum,” recalls Shepherd. “It reminded me of school. I got in trouble one time for drawing all over the walls. David’s book spoke volumes to me, the rawness of it took me back to those school days.” Shepherd asked Shrigley if he wanted to collaborate on an animation film. Shrigley agreed and then the two artists spent the next five years talking about it. Finally, Shrigley showed Shepherd his book, Who I am and What I want, and both agreed that the story should be the basis for the film.

Complementing Shrigley’s perfectly primitive drawings is the narration of actor Kevin Eldon. Eldon’s machine gun pace and smart ass tone –not to forget Shrigley’s sharp, sparse text, are key to the film’s success. It was clever the way Kevin played Pete. An educated man in a state of total denial.”

Silence is Golden from chris shepherd on Vimeo.

While Silence is Golden is predominantly live-action, the animation plays a pivotal role in the film as a stand-in for young Billy’s lively imagination. “I like people and the real world. I also like imagining stuff in the context of everyday settings. So it’s natural for me to mix live action with animation. In Silence, it’s all Billy’s about fantasies. The world inside Billy’s head was like a 70’s episode of Doctor Who, although maybe it’s a bit darker than what you might see on the telly.”

The Massive Creative Fellowship Behind ‘The Lord of the Rings: The Rings of Power’
‘The Dragon Prince’ Director Villads Spangsberg Talks Toonlines and Tough Challenges
Laurence Fishburne and Steve Loter Talk ‘Marvel’s Moon Girl and Devil Dinosaur’
Taking an Old-School VFX Approach in ‘All Quiet on the Western Front’
‘Natural Habitat Shorts’: Like ‘Ranger Rick,’ But for Adults
Framestore Sets Sail on ‘1899’ with New Virtual Production Tools
VFX is the ‘Thing’ for Tom Turnbull on Tim Burton’s ‘Wednesday’
We Need to Chat
END_OF_DOCUMENT_TOKEN_TO_BE_REPLACED