Every Monday, Chris Robinson serves up Animators Unearthed, a brief introduction to prominent and not-so-prominent indie animators. This week's focus is Chris Hinton 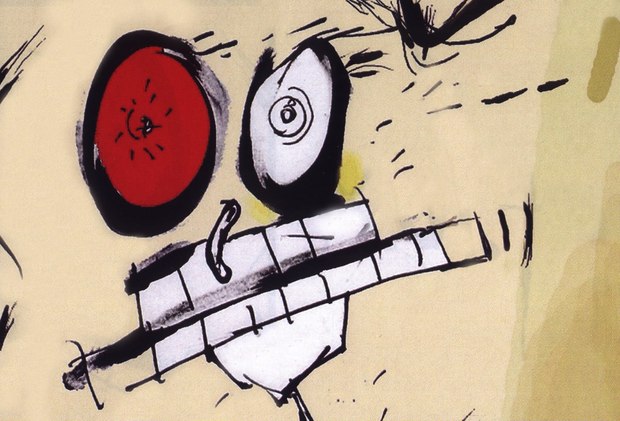 Between his parody of gun violence Watching TV (1994) and the masterful Flux (2001), Chris Hinton's work went through a remarkable transformation. From his first animation film, Lady Frances Simpson (1978) through to the Oscar-nominated Blackfly (1991) and Watching TV, Hinton’s work was characterized by the Winnipeg aesthetic. Having emerging as an animator in Winnipeg with the likes of Richard Condie (The Big Snit), Cordell Barker (The Cat Came Back) and Brad Caslor (Getting Started), Hinton’s work had a recognizable cartoon aesthetic dominated by over the top gags. The characters were nervous. They had shaky eyes and long, fleshy noses. By the mid 1990s, this was the Hinton trademark. He made smart, funny cartoons.

Blackfly, Christopher Hinton, provided by the National Film Board of Canada

It was shock then when Flux hit the animation festival circuit. The humour was still there, but the style was as different as Disney and McLaren. Tinged with elements of Joan Miro, Flux was rough and raw, the characters were barely discernable from the black stained backgrounds. Scribbled images manically bounced around the screen as Hinton told a funny, poignant story about the cycle of family and life. For the first time, Hinton seemed to be giving us something personal, a token of his experience.  Flux was instantly hailed throughout the film festival circuit.

Flux, by Chris Hinton (Preview) from Acme Filmworks on Vimeo.

“I really hated Watching TV. I just hated what happened with the film. I hated the process of making it. It just became too important for itself. And when I finished it, I realized I never wanted to use that technique anymore. I did not want to work that way again.”

Hinton had tired of working with cel animation. He felt it was an impersonal imprint that had been formed in him from growing up in the 1970s with the National Film Board of Canada and Sheridan College (one of the premiere classical animation training grounds in the world).

Two very different events happened in the late 1990s that shook Hinton out of his complacent cycle: digital technology emerged and Hinton’s father died. “I can remember that moment just seeing my father dead and it just did something to me. I started doing the math on how many years I had to make films, and what was I doing here.  I decided that I was going to do things my way, and tell my stories. I just found complete freedom, having my own setup. I had my own studio. I could simply start the film and if somebody wants to make it, fine. If not, fine.”

cNote, Christopher Hinton, provided by the National Film Board of Canada

How ‘Luck’ Applies a ‘Less is More’ Approach to Comedy
Z is for Zagreb: The Animafest Zagreb Exhbition 1972-2022
Dude! - ‘Rise of the Teenage Mutant Ninja Turtles: The Movie’ Arrives
‘Super Giant Robot Brothers’: A Milestone in Virtual Animation Production
‘Luck’ Aims to Bring Hope to Kids In and Out of Foster Care
Pre, Tech, and Post: The Many ‘Vizings’ of ‘Chip ‘n Dale: Rescue Rangers’
Hammering Out the VFX in ‘Thor: Love and Thunder’
END_OF_DOCUMENT_TOKEN_TO_BE_REPLACED