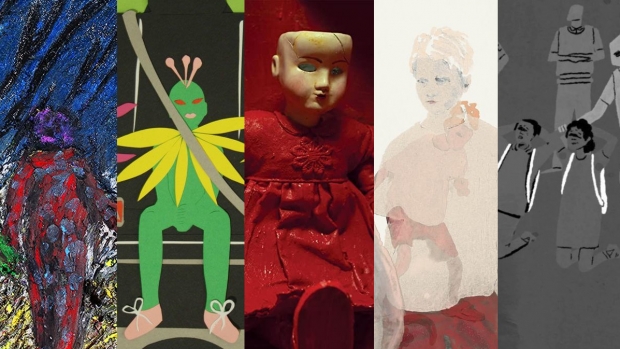 In December, the brand-new Academy Museum of Motion Pictures in Los Angeles – one of the largest museums in the United States devoted to the arts, sciences, and artists of moviemaking – dove headfirst into the relatively small and obscure world of animated documentary short films. With animation still regarded primarily as a medium of fictional storytelling, the museum’s winter screening event, “Animating Realities: Documentary Social Impact Shorts,” offered a look into the enhanced emotional impact animation can have on real-life stories.

“It’s important for us to spotlight all different approaches to the art and craft of filmmaking, which is why this program was so exciting to curate,” says the museum’s film programmer Kiva Reardon. “Animation can transcend the literal to evoke an emotional response by showing not necessarily what is, but what is experienced, felt, or seen in the mind’s eye. It can feel like a way into inhabiting someone else’s point of view rather than gazing at it or simply consuming it.”

The screening featured six shorts: Nutag (2016) by Alisi Telengut tells of the displacement and exile experienced by Kalmyk people; Hair Piece: A Film for Nappyheaded People (1984) by Ayoka Chenzira takes a satirical approach to the effect of Eurocentric beauty ideals on Black women’s beauty standards; Wild Flower (2021) by Sardé Hardie and Somer Stampley shows the fragile memories of youth growing up in foster care; Carne/Flesh (2019) by Camila Kater tackles five Brazilian women’s relationships to their bodies; Recit de soi (2018) by Géraldine Charpentier tells a non-binary coming out story; and The Torture Letters (2020) by Laurence Ralph addresses victims of racist police brutality in Chicago.

“This program was especially important because it shed light on an aspect of filmmaking that is often neglected: animated shorts that deal with serious social issues,” says Ralph. “There is an exciting range of work, old and new, within this subgenre. I wanted The Torture Letters to be regarded as a model of an animated short that blends political awareness and narrative storytelling to very good effect.”

It was actually Laurence’s film that inspired the idea for “Animating Realities.” BRON Media Entertainment co-founder and president Brenda Gilbert, and Academy Award-nominated producer Jinko Gotoh approached the Academy Museum after having seen The Torture Letters, wanting to find a way to continue the discussion around both Ralph’s film and, more broadly, how documentary animation can be a tool in catalyzing discussion after the credits have rolled.

After the screening – which highlighted animation styles from hand-painted to cut-out to collage and more – there was a panel discussion with Gotoh, Gilbert and filmmakers Ralph, Hardie, and Stampley.

“In addition to the craft - the time and labor that goes into the animation process is something that I personally love to hear about and reflect on - the discussion covered the challenges and liberations of telling a personal story, often laced with trauma, through the animated forms as a means that allows for greater poetic expression,” explains Reardon. The Torture Letters New Trailer! from Laurence Ralph on Vimeo.

Ralph adds, “I think animation is really effective for non-fiction. I think we underestimate how often we use our imagination in daily life. Speaking in a metaphor is an imaginative use of language, for example. So with live-action, filmmakers often gloss over the creative use of human imagination. But with animation, we can actually visualize our thoughts. If I say, ‘The idea came to me like a bolt of lightning,’ I can create the lightning bolt and the viewer can see it striking the person and morphing into the representation of an idea. So in that sense, animation can be very true to how people feel and think. That’s why I think it can be really effective and successful in translating human experience.”

Ralph’s The Torture Letters first began as a book he’d written as a Professor of Anthropology at Princeton University covering the long-term consequences of police violence.

“My book centered on 125 Black men who were tortured in a Chicago police precinct,” he explains. “These torture survivors spearheaded a Reparations Ordinance in Chicago, which demanded that the school board create a new curriculum that addressed the history of the police torture scandal. The curriculum was essential because one of the things the torture survivors have repeatedly said is that they wanted to make a younger generation aware of what happened to them so that history doesn't repeat itself.”

He continues, “My animated short aimed to reach teenagers so that they could learn about this history. I knew it would be difficult for them to read a 200-page book. But I could reach them with a 13-minute film that expressed the emotions of being victimized by the police.” Made up of a series of letters addressed to the victims of the Chicago police violence, The Torture Letters is animated in 2D and narrated by UK-based animator Jocie Juritz. “Jocie and I bonded over our love for cubism,” recalls Ralph. “I wanted to introduce the African American tradition of cubism into the film. A significant visual influence was Jacob Lawrence, known for ‘dynamic cubism’ and modernist representations of African Americans' everyday life. We wanted to use abstract shapes to convey the haunting violence of police torture, but also the possibility for transformation. In the film, whenever forms are about to engulf the characters, they morph into something else or break apart. That represents hope.”

As he worked on these visual representations, utilizing abstract design and illustration to convey more violent themes, Ralph says his emotional response to the stories he already knew so well grew exponentially, especially when he made the choice to begin the film with his own story.

“The film starts with the first time I experienced police harassment,” says Ralph. “I was 12. My older brothers were stopped and frisked in the mall. The funny thing about that is, when I was interviewing Black youth in Chicago about their first encounter with the police, they wouldn't respond. They said, ‘First you have to tell us about your first encounter.’ That's why I start the film with myself.” He adds, “When I was writing the book, I always felt like I wasn’t able to tap into the emotions that were there when I was conducting the research. As an ethnographer, we spend a lot of time with people - in this case, victims of violence - learning about their lives. I had attended many public events where torture survivors discussed what happened to them, and I had interviewed many victims of police violence. But it was difficult to convey the emotions of those experiences in words alone. While creating the film, I was able to tap into those emotions and imagine ways to render them visible. It was a totally new experience for me. But it was very fulfilling.”

It was an equally fulfilling experience for those who watched The Torture Letters and the other animated documentary shorts in The Academy Museum’s program; their responses to the films during the panel discussions affirmed both Ralph and Reardon’s belief that animation offers an underrated channel for real-life storytelling.

“It was amazing to see the audience’s reactions,” says Ralph. “I love animation because people will watch it with an open mind. Whether it's an animal or human, the viewer feels they can relate to the character. So in addressing a difficult topic like police violence, I wanted my audience to know what it felt like to be vulnerable. As a storyteller and educator, a key advantage of animation is the ability to discuss difficult topics without ‘turning off’ the audience.”

“I think something like Wild Flower, which talks about the foster care system through the eyes of a child, speaks to this as well,” adds Reardon. “The cut-out animation invokes a whimsical feel, or a youthful, naïve gaze, while discussing complex issues.” Thrilled by the range of films they were able to gather for the recently opened Academy Museum’s first screening program of its kind, Reardon says he and the museum are currently exploring possibilities of hosting more animated documentary screening events like Animating Realities in the future.

“The Torture Letters is the film I wish I had when I was a teenager,” says Ralph, whose film was also included as part of The New York Times’ Opinion Documentary series. “But I knew I wouldn't have watched it back then if it was a realist documentary. So, animation was vital.”

Choc Chip Animation Riffs on Pop Culture in ‘The Art of Murder’
F is for Flake: The (Not So) Great Animation Robbery?
Re-VIEW: ‘Avatar: The Way of Water’ – A Miraculous Vision
‘Kung Fu Panda: The Dragon Knight’ Celebrates a Special Lunar New Year
END_OF_DOCUMENT_TOKEN_TO_BE_REPLACED