While McKay is remembered for ‘Little Nemo’ and ‘The Sinking of the Lusitania,’ it was a passenger steamer named The Alpena that may have had the biggest impact on the pioneering animator’s career. 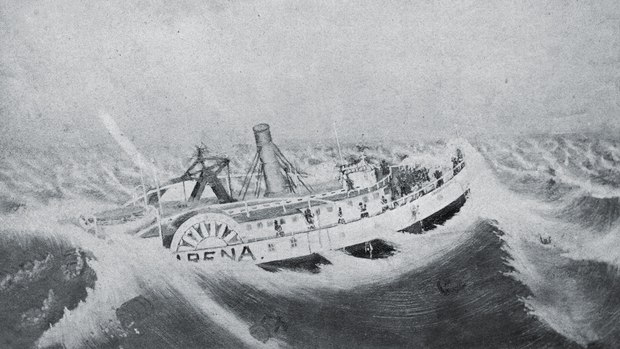 The Sinking of The Alpena, drawn by Winsor McCay, 1880.

History recognizes Winsor Zenas McCay as the creator of the first animated film released in America. Little Nemo, the silent short, made its debut April 8, 1911. It was a pioneering moment in motion picture making.

McCay’s subsequent animated shorts, How a Mosquito Operates, released in 1912, and Gertie the Dinosaur, released in 1914, brought the artist sufficient recognition by filmmakers. But it wasn’t until the release of his cartoon, about the sinking of a ship, that McCay earned widespread respect.

The Sinking of the Lusitania received the most fanfare of McCay’s animation works, gaining critical acclaim and historical relevance, in a time of war. The RMS Lusitania, sunk by a German submarine in 1915, carried nearly 2,000 aboard to a watery grave. Americans onboard numbered 128.

McCay’s employer at the time, newspaper magnate William Randolph Hearst, opposed the U.S. entering World War I, and tasked the artist to draw anti-war editorial cartoons. McCay, harboring an opposing viewpoint, wasn’t a happy camper. Thus, in 1916, he undertook the patriotic Lusitania project on his own time and dime.

The film, released in 1918, runs 12 minutes. It was selected by the Library of Congress United States National Film Registry for preservation in 2017. It has joined the collection due to being “culturally, historically, or aesthetically significant.”

However, it wasn’t this ship that had the most profound influence on Winsor McCay, concerning a career in art. It was another ship, a passenger steamer named The Alpena.

Winsor Zenas McCay spent the first 18 years of his life as a resident of Spring Lake, Michigan. His birth name was Zenas Winsor McKay (His father, Robert, later changed the spelling of his family’s last name to McCay). The animator’s first and middles names came from his father’s employer, entrepreneur Zenas Gilbert Winsor. Zenas G. Winsor lured Robert McCay, father of the future artist, from his hometown in Canada to Spring Lake, to take a job hauling goods for his company. Robert and his wife, Janet, made that move in 1866.

Young Winsor McCay, like his brother Arthur, and sister, Mae, attended Spring Lake Union School. The learning institution featured all grades under one roof. As a student, it was said that Winsor scribbled little illustrations in the margin of his textbooks, much to the disapproval of teachers.

However, one teacher, 22-year-old Hattie Capitola Schofield, recognized Winsor’s talent and encouraged the aspiring artist. Aside from being a teacher, Schofield was an accomplished area portrait artist. After the sinking of a local passenger ship, Schofield allowed McCay to draw an illustration of the disaster on her classroom blackboard.

The Alpena departed the nearby Grand Haven port on October 15, 1880, and was reported to be lost early the next morning after a historic Lake Michigan storm.

When wreckage from The Alpena began to come ashore days later, the fate of ship was undeniable. There would be no survivors. All 80 aboard had perished.

But what compelled 13-year-old Winsor McCay to draw a depiction of the sinking of The Alpena?

The answer goes back to his namesake, Zenas G. Winsor. The old gentleman, who Winsor looked up to like a grandfather, had taken the job of ticket agent for the Goodrich Transportation line at the Grand Haven port five years earlier.

Robert McCay sometimes brought Winsor along with him when conducting business in Grand Haven. He would have dropped him off at the port, just over the bridge, a few miles from the McCay home.

Zenas G. Winsor kept an eye on Winsor as he hung out on the docks, and gave him tours of Goodrich’s ships moored at the harbor. One of the vessels was the passenger steamer, The Alpena.

When The Alpena sank, Zenas G. Winsor found himself caught in the middle of a crisis. He not only had sold every ticket to the doomed passengers, but now was in charge of contacting families when bodies washed ashore, to make arrangements of where to send remains.

Many dead bodies were stored in the Goodrich Transportation building, literally feet from the agent’s desk. Matters became worse when news of the ship’s state of disrepair emerged in the press. Many claimed she was barely seaworthy.

While Zenas G. Winsor wasn’t responsible, the trauma of the incident caused him to retire shortly thereafter. He moved to neighboring Grand Rapids and lived there the remainder of his life.

It was the personal connection to Zenas G. Winsor, and his memories of being aboard the vessel, that compelled the young artist to draw a depiction of The Alpena’s final moments.

Surrendering her classroom blackboard, Hattie Capitola Schofield provided a canvas for what would become McCay’s first commercial illustration. Upon completion, a photographer snapped a picture of it and offered McCay a cut of the profits from the prints. It was his first sale. There can be little doubt that was the moment he imagined, I can make money doing this?

It is unclear how many prints of the photo were sold, but it had to be a keepsake for many, some who had lost loved ones. Today, two prints survive. They are housed in Ottawa County, Michigan museum archives. The detail of McCay’s The Alpena illustration when compared to photographs that exist of the actual ship is remarkable. But he had been aboard the ship at port, even seeing rigging on the top level. The young artist virtually replicated the vessel from memory.

One amusing aspect of the illustration (the full print) is that the top half of the drawing is sky only, which reveals McCay’s small stature and reach at the time. While he had a tall blackboard at his disposal, he created the illustration at, and below, eye level. Thus, the ship in action appears in the lower half of the blackboard.

Peaked waves in the 1880 drawing are a telltale signature of McCay’s work that carried over into his The Sinking of the Lusitania animated film. The tiny stick people representing the doomed passengers are eerily familiar in both. Other artistic aspects he displayed at age 13 developed into his signature style.

There can be no doubt McCay recalled the sinking of The Alpena when he embarked on the creation of the Lusitania cartoon. While the Lusitania had global significance, The Alpena was a personal experience. It resulted in something historic -- the genesis of a young artist’s career.

After departing Union School, Winsor McCay’s father pressed his son to pursue more realistic ventures, sending him to Clearly Business College in Ypsilanti, Michigan. But Winsor continued his interests, leading to a career in art. He did pretty well for himself, producing the first cartoon released in America and went on to create countless, critically acclaimed comic strips.

Every year since 1972, the International Animated Film Society, at its annual Annie Awards, presents the Winsor McCay Award. It is given to individuals in recognition of lifetime, or career, contributions to animation.

Not bad for a 13-year-old kid drawing on his classroom blackboard.

Kevin Scott Collier is an author and illustrator with 40 years of professional experience in advertising and design.

For ‘Loki’ VFX, Time is On Method Studios’ Side
Nailing the Unique, Stylized Animation of ‘What If…?’
Virtually Sensational: Previewing SCAD AnimationFest 2021
‘Star Wars: Visions’ Takes Japanese Culture and Anime to a Faraway Galaxy
‘Chicago Party Aunt’: Turning Life’s Sh*t into Mike’s Hard Lemonade
Talking Real-Time Animation with DNEG, BRON, and Chromosphere
France’s TeamTO Gets By with a Little Help from Their Friends
Another Chance at Unplanned Parenthood in ‘Teenage Euthanasia’
END_OF_DOCUMENT_TOKEN_TO_BE_REPLACED