Women and queer-owned animation studio Mighty Oak deftly integrates stop-motion, collage, motion-graphics and different 2D styles on Netflix’s docuseries that tackles the myths of sex education and how pleasure occurs in the mind. 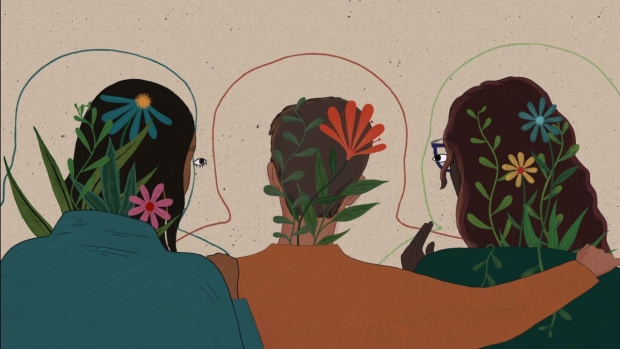 Narrated by comedian Michelle Buteau, the series brings sex, joy, and modern science together to celebrate the complex world of pleasure. Through talking head interviews and mixed media animation, each episode covers a different aspect of pleasure: debunking the myths of sex education, how pleasure occurs in the mind, and how others can affect our pleasure. The project was produced by Netflix, Mighty Oak, and The Front, a female-first creative think tank and documentary production studio, founded by former VICE executive, Thalia Mavros, that develops and produces powerful stories with purpose.

On The Principles of Pleasure, Mighty Oak deftly produced over 30 minutes of animation with a mix of different styles. Stop-motion was used to create all kinds of objects — sex toys, a wall of Bon Jovi posters, and, of course, a vulva cupcake. Series graphics were led by Dorca Musseb. Episode 1 used a painterly style based on Holly Stapleton’s work -- animation was direction by Hannah McNally. Episode 2 used a hand-drawn look based on Manjiit Thapp’s work - animation was directed by Stephanie Swart and Jessica Milazzo. Episode 3 used a futuristic airbrush-y look by Debora Cheyenne Cruchon - animation was directed by Nivedita Sekar.

Check out the series trailer before reading more on how the animation was produced:

According to Barbour, “From concept to completion, it took us six months to produce over 30 minutes of animation with a team of about 50 people. Along with the incredibly talented designers and animators, we had a wide variety of specialists to help us bring this to life such as archival researchers, medical illustrators, hand models, 3D printers, and sex toy stylists.”

Describing the studio’s design choices, Olsen, who served as animation creative director on the project, explains, “For the 2D animation, the team at The Front wanted to feature the work of three prominent illustrators (one for each episode) and our job was to bring those illustrations to life with our amazingly talented team of animators. We start off with a beautiful, more loose painterly style (designed by Holly Stapleton) for Episode 1, which is about the foundations of sex ed. Then, in Episode 2, as we gain more knowledge, the style becomes a bit more architectural and detailed (based on Manjit Thapp’s illustrations). And then, in Episode 3, the series culminates in this cleanly rendered, futuristic style from the mind of Debora Cheyenne Cruchon. It really plays on the series’ intention to give people a fuller, more fleshed out understanding of pleasure.” “We also created a mix of simplistic stop-motion and object animation, plus elements of collage and motion graphics,” she continues. “While the 2D animation was used to portray the more emotional parts of learning about pleasure, these scenes were used to show more practical information, like timelines and graphs. They were also used to bring in an element of humor and lightness to some complicated subjects. We always love to add an element of humanity, even into data visualization, so we used pixelated (stop-motion animated) human hands throughout, creating a connection to the audience. For The Principles of Pleasure title sequence, we built the title out of 3D printed letters that were lit from within, and then filmed a group of hand models putting the letters together like a puzzle using time-lapse.”

In noting that every type of animation is meant to feel approachable and not overly complicated, Olsen adds, “If the goal is to teach people what their vulva looks like, let’s not beat around the bush (no pun intended) and base it on realism and biology as best we can. To that in, we specifically brought on an incredible scientific illustrator, Andrea Hines, to create illustrations of the human body, and lots of genitals.”

For Mighty Oak, the “cool” thing about documentaries is that they are always evolving to find the story, though with animation, it’s an additive process; having a locked script is ideal, because you’re using every second of animation that you make. “Finding that balance between the two mediums is always challenging but fun,” Olsen shares. “Animation is truly the perfect way to explain something complicated or recreate something that can’t be recreated in live-action. Documentaries and animation will always be dear friends in this way.” Another big challenge on the project was the incredible difficulty creating visuals that represented a wide range of people. “There is a whole spectrum of body types, genders, and sexualities in the world, and it really challenged us to find ways to be inclusive while still reaching a broad audience,” Olsen says. “We did our best, but we can always improve, and we have to keep striving for that.”

“Overall we learned SO MUCH on this project, not only conceptually and visually, but how to do a large-scale production for a company like Netflix,” she concludes. “This is our biggest project to date and even though it wasn’t always easy, our team really nailed it, and we’re really proud of the animation we created.”