All New ‘Blue’s Clues & You! Debuts on Nick 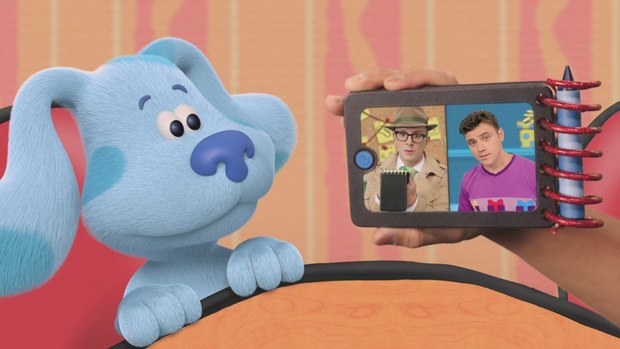 It’s finally back – Blue’s Clues & You!, an all-new take on the seminal Nickelodeon preschool series, debuted this past Monday, November 11, pawing its way into living rooms everywhere; the series offers a whole new generation of young viewers a chance to meet the beloved puppy, Blue. The original Blue’s Clues series launched in September 1996, winning critical praise from educators, parents and preschoolers. Running for six seasons, the show set the bar for every curriculum-based show made ever since. Although it’s considered a remake and retains some of the original show’s iconic elements, the series is an updated reboot designed to appeal to today’s audience.

The curriculum-based kid’s show genre has changed significantly since the original series aired, which impacts both the creative and production decision-making for the new show. Today, preschoolers do much more than just passively watch TV; with play-along videos, kids can explore the show in an interactive, immersive manner, engaging with live-action host Josh and the animated characters by tapping, touching or swiping to navigate through enhanced learning experiences.

Co-creator Angelea Santomero (SUPER WHY!, Daniel Tiger’s Neighborhood) explains, “It’s about interactivity! Kids PLAY with Blue’s Clues. They lean in, talk to Josh, play the games, find the clues, and figure out the answers. Kids play the show all the way through as they practice key skills and love every second of it. Blue’s Clues was founded in child development and a new way to watch television - which is still breakthrough and different today!”

Maintaining and honoring the integrity of the original Blue’s Clues, while creating an immersive experience for today’s more sophisticated preschooler, has its challenges.

“The biggest challenge is balancing the fine line of nostalgia and the new,” Santomero continues. “We love this show and want to elevate and honor this brand… and make sure today’s audience loves it as much as kids did back in 1996! There are so many more shows than ever before, but we believe that Blue’s Clues & You! still stands out because of the incredible writing and foundation in kids; breakthrough designs; music; and overall look of 3D, 2D and live-action with a phenomenal actor in Josh Dela Cruz!” Some new and old things to expect in Blue’s Clues & You!:

Nickelodeon is deepening the interactivity of Blue’s Clues & You! with the launch of play-along videos on Noggin, Nick’s interactive learning subscription channel for preschoolers. Kids also will have the ability to customize elements, like the color of the clues or the creation of birthday cards for Blue, and then see their designs appear throughout the video. The classic Blue’s Clues library is currently available on Noggin and additional Blue’s Clues & You! play-along videos will continue to roll out into next year.

Following the series premiere of Blue’s Clues & You!, NickJr.com and the Nick Jr. App will feature original short-form content and full-length episodes. Episodes will also be available on Nick Jr. On Demand and Download-To-Own services.