The Oscar-winning ‘The Windshield Wiper’ director returns to Netflix’s iconic animated anthology with another short, ‘Jibaro,’ about a bloody, enrapturing clash between a gold-thirsty knight and a mysterious river siren; the iconic series, executive produced by Tim Miller and David Fincher, debuts today, May 20. 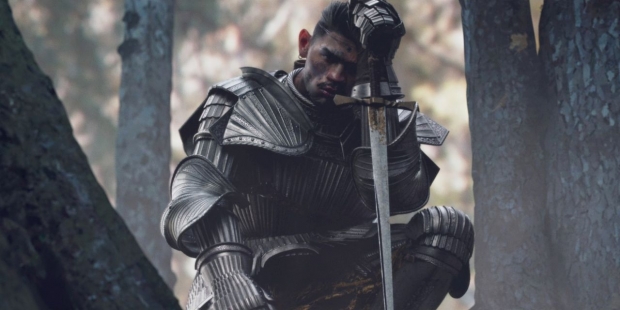 Among the artists and storytellers who have returned for Love, Death + Robots’ third volume, Academy Award-winning director Alberto Mielgo has created yet another visually intoxicating, but thematically toxic, tale of sensuality and murder.

“Not everything has to be about a guy that is saving the world or who has a nice hero’s journey, where you can see how he's evolving into a better version of himself,” notes Mielgo. “In this case, there is no improvement. Actually, it’s the opposite. They both end up being the worst versions of themselves. And there is no lesson that they learn. They both lose. Honestly, I like when a film leaves me a little bit uncomfortable.”

Or perhaps, in this case, a lot uncomfortable. Mielgo’s 3D animated short, Jibaro, is part of the newest group of shorts in Netflix’s high-profile animated anthology, Love, Death + Robots Volume 3, premiering today on the streamer. The latest volume is again executive produced by Tim Miller (Deadpool, Terminator: Dark Fate) and David Fincher (Mindhunter, Mank), who each also direct one of the new films, with Jennifer Yuh Nelson (Kung Fu Panda 2 and 3) serving as supervising director, as well as directing one of the shorts herself.

Watch the final trailer and beware, there are a few potential spoilers that follow!

Jibaro tells the story of a less than noble knight who, after obtaining a piece of mysterious gold from a river, awakens a siren, covered in gold and jewels, who then unleashes her wrath upon the knight’s fellow soldiers. While the rest of the men die in a bloody massacre after the siren’s screams cause them all to go mad, the gold-stealing Knight escapes, which piques the interest of the siren, who decides she must have him for herself.

As the story goes on, and lustful tensions rise, the knight and the siren pursue each other, only to destroy each other in the end.

“What I want the audience to understand is that this is a film that is not about heroes,” says Mielgo, fresh from taking Oscar earlier this year for his animated short film, The Windshield Wiper, a story about a man who searches for the answer behind "What is Love?" “None of our characters here are heroes. In fact, both of them are pretty sketchy. There are moments when the audience is going to favor one over the other. In the beginning, you'll see that the woman is a monster but later you’ll feel more empathy for her.” “The Witness, for me, was like when you get in those relationships that you can never end,” says Mielgo. “It's like a loop where you both are trying to communicate, but you are not listening to each other. And Jibaro is also talking about a relationship that is extremely toxic; about a relationship between predators that is sensual because it’s based on the attraction to each other for the wrong reasons. I like when you don't know who is the real good person and who is the bad guy. It promotes a strong feeling.”

And that strong, unsettling feeling is emphasized by Jibaro’s intense cinematography, the title referring to an individual in touch with the wild, rural environments of Puerto Rico. While the vibrant, slick, and glossy 3D animation pulls viewers’ eyes into Jibaro’s inviting settings and aesthetics, the violent, ever-moving vibrations of the film’s camera work cause feelings of disorientation, meant to make those watching the story feel like they are actually part of the narrative.

“I do like when the camera is alive,” the director explains. “I like to make the audience feel like you are actually there and maybe holding the camera yourself. If you do it right, it gives an extra dose of realism.”

He adds, “Also, in terms of action, I really like when the camera is also exhausted. There is not even a second that it's able to focus on one frame properly. In real life, when you are in the middle of some sort of action or some fight, it is very difficult to focus. And those are the things I wanted to put in the film because you can then transmit to the audience that feeling of stress.”

Mielgo’s method is extremely effective, but it was also extremely difficult to pull off.

“Technically, this film is extremely complex,” Mielgo notes. “Simulating water and splashes in contact with armor, in contact with jewelry, while they’re all moving and colliding into the water, that's very difficult. And it was extremely challenging. But I wanted to push technology and push these visuals and push the artwork to the limit. We actually did it, which is great. But it was definitely not easy. It’s nice to be able to do it within a short because you have the capacity to create something really spectacular and, because it’s condensed, you have more freedom to explore the technology.”

Jibaro’s hybrid integration of 2D paintings and 3D animation is also a much less pernicious love letter to nature and natural beauty; scenes of horrific violence and abuse take place amidst glistening waterfalls and sparkling forests rich with sunlight.

“I'm usually working in city landscapes, and I was really happy to get into something that was a bit more organic, with the birds, insects, and the wind,” says Mielgo. “That’s how I thought of creating some sort of Renaissance fable, in the middle of the forest with all these armors contrasting with the beauty of organic elements.”

But the beauty of nature, as well as the captivating metallic armor and characters adorned in gold and jewelry, are not meant to distract from Jibaro’s timely message.

“These two love each other for the wrong reasons, and that's what is happening nowadays in modern relationships,” he continues. “We use and we choose people for a completely wrong reason. And they choose us for a completely wrong reason as well. And we end up all suffering. There are people who are lucky that they've been together for whatever years since they were very young. But most of us, we struggle to find our second half. I love to talk about that because it's very personal. And when you talk about personal stuff, I think that you actually make the audience understand it and make them feel that it's real.”

Animated Characters: The Art of Babbitt – Part 1
Bruce Smith and Ralph Farquhar Talk ‘The Proud Family: Louder and Prouder’ Season 2
VFX is the ‘Thing’ for Tom Turnbull on Tim Burton’s ‘Wednesday’
We Need to Chat
Choc Chip Animation Riffs on Pop Culture in ‘The Art of Murder’
F is for Flake: The (Not So) Great Animation Robbery?
Re-VIEW: ‘Avatar: The Way of Water’ – A Miraculous Vision
‘Kung Fu Panda: The Dragon Knight’ Celebrates a Special Lunar New Year
END_OF_DOCUMENT_TOKEN_TO_BE_REPLACED