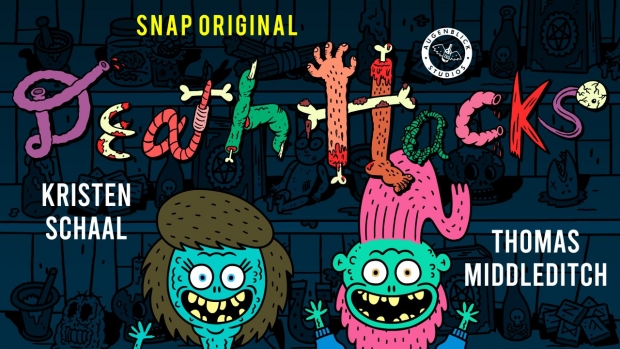 From the slightly askew minds of Brooklyn’s Augenblick Studios, founder Aaron Augenblick’s in particular, comes a new horror comedy, Death Hacks, a Snap Original series starring Kristen Schaal and Thomas Middleditch as Adam and Molly, two effervescent life hacks “ghost hosts” offering upbeat advice for the recently deceased, helping them turn up their afterlife with suggestions on important topics like dating while dead, haunting the living and how to suffer in a timeless void. The 10-episode series, now playing on Snapchat, premiered August 29 with a release schedule of every 48 hours.

“Death Hacks is a show I created and developed here at the studio,” Augenblick explains. “Development is something I have been focusing on more and more. It's so exciting to have a seed of an idea and then get to see it all the way through to a finished series. As everyone in our industry knows, it's rare! This was an in-house show, and a labor of love. Snap has such a huge viewership (millions and millions) that I'm excited to share this with the world.” For Augenblick, Death Hacks was a “dream to produce,” combining his two favorite things: cartoons and horror. “Snapchat encouraged us to push the envelope and take advantage of all the bells and whistles of the new medium,” he shares. “I love to experiment with format, so it felt like every day we were trying new things and making new discoveries. The 9:16 aspect ratio alone had us rethinking composition, and how to direct the eye. Add to that split screen, see-say text, and fast pace. It was a real thrill! It feels like Death Hacks is a brand-new form of cartoon, which I am very proud of.”

The goal of the show was to parody modern social media culture using horror tropes. According to Augenblick, “We had so much fun exploring modern trends, lifestyle brands, and Internet celebrities. Everything felt very ‘now.’ Snap was really good at policing how quickly slang and trends become dated! They once told us ‘AF is dated AF!’ It was important to us to have fun with modern culture and never get judge-y or sardonic. There is an optimism and excitement in our main characters Adam and Molly that I find very endearing. They want to make the best of being ghosts. They want to be the most popular influencers in the afterlife, which is kind of sweet.”

“I'm a huge fan of horror, and our whole writers’ room was a bunch of horror junkies,” he continues. “So, it was important to all of us that we respected the genre, and went deeper than most shows do. The really scary stuff: Clive Barker, Lovecraft, Dante, Serial Killers. But of course, we approached it all in a really silly way. Those are my favorite moments, when you're not sure whether to laugh or be totally freaked out! Haha. Luckily, we got one of my very favorite cartoonists to design the show, David Degrand. David has a brilliant way of combining horror with classic cartoony-ness. He's influenced by Romero and Tex Avery equally. The animation was directed by Katie Wendt, and she made the animation feel so fun.”

Last year, Augenblick Studios celebrated 20 years of producing adult animation series for Comedy Central such as Shorties Watchin' Shorties (2004), the faux-documentary Golden Age (2006), and Ugly Americans (2010-2012), as well as animating with creators like Adult Swim’s Tyler Gregory Okonma for The Jellies! and Netflix series like Losers. Augenblick Studios also produced the animation for Red Hour Film’s Zoolander: Supermodel, which while originally conceived as a series, has just been released on CBS All Access as an 84-minute film. The work was first released in 2016 by Netflix in Ireland and UK after the release of Zoolander 2.

The studio has also recently began production on its first animated feature film and R-rated comedy, The Adventures of Drunky, a sophisticated take on falling from grace, and being down but never completely out, that stars Sam Rockwell, Jeffrey Tambor, Steve Coogan, and Nina Arianda.

Framestore Sets Sail on ‘1899’ with New Virtual Production Tools
Animated Characters: The Art of Babbitt – Part 1
Bruce Smith and Ralph Farquhar Talk ‘The Proud Family: Louder and Prouder’ Season 2
VFX is the ‘Thing’ for Tom Turnbull on Tim Burton’s ‘Wednesday’
We Need to Chat
Choc Chip Animation Riffs on Pop Culture in ‘The Art of Murder’
F is for Flake: The (Not So) Great Animation Robbery?
Re-VIEW: ‘Avatar: The Way of Water’ – A Miraculous Vision
END_OF_DOCUMENT_TOKEN_TO_BE_REPLACED