After 20 Years in Animation, Toonz Media Group is Just Getting Started

From its humble beginnings two decades ago as an early Indian animation pioneer, TMG continues to grow internationally as it embraces ever-expanding global markets. 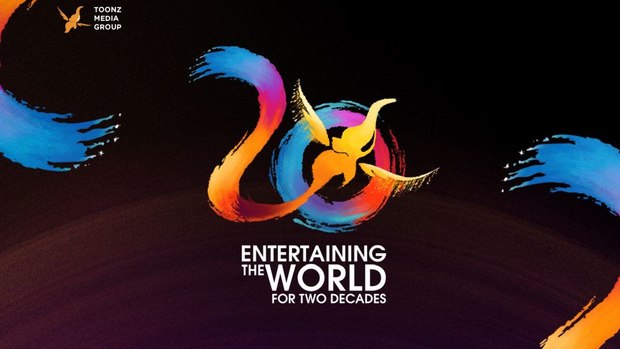 For Toonz Media Group (TMG), 2019 marks 20 years in business, a journey that has taken it from a humble startup Indian animation studio to one the largest and most diverse media companies not just in Asia, but the entire world. As the creator of India’s first-ever 2D animated TV series, first 2D feature film, and first 3D stereoscopic theatrical release, TMG has been at the forefront of specialized content creation, production, distribution and rights exploitation, digital and gaming content development, licensing and merchandising, AR/VR, and other emerging technologies in India for two decades now.

In continuing to push geographic boundaries, Toonz has extended its reach across the globe with various divisions leading the way in animation, live-action, co-production, special effects, and pre and post-production. With titles such as Marvel’s 2009 toon series Wolverine & the X-Men under its belt, the Kerala-based company has come a long way since its formation in 1999 as part of Comcraft Group’s kids-and-family-focused Toonz Media Group. “When we started the company, getting to where we are now was a distant dream,” TMG CEO, P. Jayakumar, shares. “Although we always remained optimistic, the industry was in its nascent stages. Indian animation was not even a sector 20 years ago. We had to build from scratch not just our own business, but the animation ecosystem in the country as well. It was also not easy to convince international clients to collaborate with a company that was established in a country with very little scope for animation at that time.”

Toonz Animation produces over 10,000 minutes of 2D and 3D animated content every year; titles include The Adventures of Tenali Rama, Speed Racer: The Next Generation and Sherazade: The Untold Stories. They have just partnered with Telegeal and Imiria Entertainment in co-production on Mondo Yan, a 52×11’ series, due to be released in 2020, which follows the comic adventures of three teenage “guardians” who have been chosen to protect the mystical land of Mondo Yan.

“We’re extremely happy to have had the chance to lead the animation scene in India and to eventually become one of the global market leaders,” Jayakumar states. “In this our 20th Anniversary year, we are positioned better than ever to expand our business operations and to extend our global footprint even more.”

Other recent additions - Toonz New Zealand and Toonz Turkey - have allowed TMG’s focus to include production and distribution in the Australian and Middle Eastern markets. As global production increases, the search for good talent has become an ongoing challenge for animation and VFX houses. TMG is no different: expansion has meant they’re continually seeking new talent like everyone else in the industry.

According to Jayakumar, “We face two main challenges as a company. First, finding highly talented storytellers, animators and directors within the Indian industry, which is a difficult task. Over the years, the Indian animation and content industry has seen significant growth, especially in viewership; however, there is still a dearth of skilled, key talents. Second, the lack of subsidies. Unlike Canada, France, China and other European and Asian territories, India’s animation ecosystem does not have a system for tax credits and subsidies.”

To address these challenges, while also “giving back” to the creative community and encouraging young artists, TMG has launched several initiatives. These include establishing The Toonz Academy, one of the top animation schools in India, and sponsoring events like the Cocoon Concept Lab and Animation Masters Summit, all which have nurtured a passion for animation among young artists, as well as the attention of government representatives.

Peering across the oceans, TMG continues to eye opportunities at home and abroad. Currently, TMG’s Chotoonz TV, their flagship global web and YouTube channel for kids, has over 5 million subscribers generating 100 million monthly views, with 4 billion video views to date. Linear channels for different age groups have also been created, including Malish TV, a kids’ TV channel for Russia and other CIS territories, and a partnership with Clan, the leading Spanish TV kids’ channels owned by RTVE, and its pan-Latin America channel, Clan Internacional. “In India, there are 13 channels airing across the country that offer animated content. When we started out, Cartoon Network was the only broadcaster in this part of the world airing kids’ content, Jayakumar explains. “Now, we work with regional language channels as well as OTT platforms to create content that gets aired on such platforms. The demand for content has increased exponentially and we feel this growth will continue. India is already the biggest market for kids due to its population in that target age-group, and the animation market is poised to achieve even greater growth.”

“In the international market,” he adds, “Toonz has always been a well-known media house with the best global clientele. However, the acquisitions of a few European media companies – including Imira Entertainment a few years ago, and Telegael this year- have enabled us to structure global packages for animated content creation by utilizing the ecosystem in those countries. This has placed Toonz in the best position to provide the highest quality at very competitive prices for our global customers.”

With the internet becoming more affordable and accessible, Indian animation is poised to experience unprecedented growth in both industry sustainability and increased original content. TMG is already extending its reach through its presence on YouTube, where it operates around 30 channels globally.

“YouTube has actually created a level playing field for all the creators of the world,” Jayakumar notes. “I believe significant businesses and brands can be launched through YouTube. It’s very positive for creators and animation and it creates big opportunities.” Jayakumar also sees streamers like Netflix and the upcoming services from Apple and Disney+ providing opportunities for companies in India to produce content that meets higher production standards. He views competition from ever growing numbers of streaming platforms as healthy, as demand for content in India shows no signs of slowing down as the different services cater to different audience bases.

Over the past past 20 years, Toonz has transformed from small startup into a major studio with 5,000 artists spread across 85 Indian and 20 international partner studios. The company employs a mix of creative and business professionals, all with a shared mission that includes working towards seven core values: to be people centric and to have integrity, humility, innovation, collaboration, passion, and creativity. TMG certainly appears poised to celebrate those values for many more years to come.

Taking an Old-School VFX Approach in ‘All Quiet on the Western Front’
‘Natural Habitat Shorts’: Like ‘Ranger Rick,’ But for Adults
Framestore Sets Sail on ‘1899’ with New Virtual Production Tools
Animated Characters: The Art of Babbitt – Part 1
Bruce Smith and Ralph Farquhar Talk ‘The Proud Family: Louder and Prouder’ Season 2
VFX is the ‘Thing’ for Tom Turnbull on Tim Burton’s ‘Wednesday’
We Need to Chat
F is for Flake: The (Not So) Great Animation Robbery?
END_OF_DOCUMENT_TOKEN_TO_BE_REPLACED