Animation duo Mike Anderson and Ryan Dickie’s 10-minute animated short taps Unreal Engine 5 for a post-apocalyptic adventure set 1,000 years in the future, where dance is violent, everything is hot… and no one is safe when the beat drops; film joins the network’s other original short-form content commissioned from emerging animators and comedic voices from around the world. 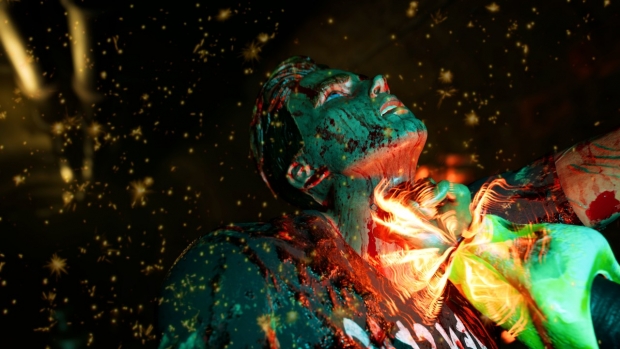 After learning of the film last November, AWN has finally been able to touch base with Mike Anderson and Ryan Dickie, creators of Hot Future, their 3DCG animated short released on Adult Swim SMALLS, the network’s platform that showcases commissioned original short-form content by emerging animators and comedic voices worldwide.

“It’s like Step Up meets Mad Max in Bollywood,” the animation duo shares about the short, a post-apocalyptic dance adventure set 1,000 years in the future, where dance is violent, and everything is hot… and Johnny can’t find his girlfriend, and when the beat drops, no one is safe.

The 10-minute film was created in Epic Games’ Unreal Engine 5, capturing the video game cutscene look the creative team was looking for. Though “short” in length, the film nevertheless was considerably challenging and involved.

Fans can find Adult Swim SMALLs on the network’s digital and linear platforms and streaming on HBO Max. Watch Hot Future on Adult Swim’s YouTube channel or below, then read more about some of the details, and challenges, of creating the short in Unreal Engine.

“It was a marathon series of sprints in each department,” Anderson and Dickie say. “The team was small but mighty!”

The team did extend beyond the duo, with Colin Alexander working on sound design and long-time collaborators Edwin Vargas and Mauro Trejos on the technical direction and character rigging, respectively.

“We teamed up with SuperAlloy for motion-capture and facial capture,” note Anderson and Dickie. “Lauren Elly was our lead motion-capture dance performer and choreographer. It was our first time working with her, and she is absolutely amazing. EP Alex Plapinger of Nice Try has been supportive from the beginning. Associate producers Brianna Sedor and Zac Swartout were crucial partners. We’re very fortunate to have such talented collaborators elevate the project from all angles.” Anderson has been using Unreal technology since 2018, bringing his extensive experience and knowledge of its versatility and capabilities to the table, making utilizing it a logical choice.

“This project, in particular, is so much about building kinetic energy between shots and timing out action to the beat of the music, so being able to see the whole sequence and adjust timing instead of exporting shot after shot into a separate editing software is a major game changer,” the duo says. “The real-time rendering workflow is so dialed in Unreal, and it allows us to see the final aesthetic result without a time-consuming and costly render.”

They continue, “To have the ability to compose a shot and drop it right into the timeline is huge. The WYSIWYG interface and fast rendering mean we could iterate fast while always looking at the final product. Everything was integrated with source control via Perforce, so we could collaborate with contractors worldwide, working on scenes simultaneously.”

The team used Unreal Engine to build out the project with the characters and props modeled in ZBrush. They tapped XSens for motion-capture and Faceware for facial-capture. For rigging and animation, they used Maya, with a fair amount of animation also done in Unreal using UE5’s newest tools.

“Once we had all the assets together, we used Unreal to block out the scenes, build the landscapes, compose all the shots and sequence the edit,” Anderson and Dickie explain. “We then exported into Adobe After Effects for additional VFX and then finished out of Adobe Premiere.” Every film has an origin story, and Hot Future’s started around 2016. “Mike was writing a pitch for a tequila ad and whipped up a demo with a hulking anime character cutting some Bollywood moves,” the pair notes. He didn’t land the pitch but was inspired to build out a world that mixed up Bollywood, He-Man, Indian trap music, and Fist of the North Star.”

They continue, “There’s something fun about leaning into the Fury Road-style apocalypse as kind of a positive change: in the future, sure, the world is hot, but everybody also now has hot bodies and with hot dance moves - and while it’s violent, it’s also a wide open, polyamorous scene. The villains are like super-charged, steroided-out Austin Powers. Johnny’s the fish out of water - he’s fundamentally conservative, in conflict with a world that has moved on. It breaks him. He’s lost, trying to put the toothpaste back in the tube, trying to get his 2020 life back.”

The project was ambitious from the start. According to the two, “The opportunity to make something for Adult Swim was a dream come true, and we wanted to knock it out of the park. We had a small team, and the resources were a bit challenging, so we had to figure out how to do it pretty much all ourselves.” Despite their experience and skills, the project involved a steep learning curve; they conquered the many complex production processes through considerable trial and error.

“Lots of late nights and early mornings,” they reveal. “Lots of dedication to fail and try again. In the end, those challenges added up to great satisfaction seeing it all finally working on screen. There’s a confidence we’ve gained from being able to work through the tough parts of the process and maintain our resolve to see it through to the end.”

Adult Swim SMALLS continues to grow and promote original short-form content. Hughes, the program’s curator, adds, “We are constantly on the lookout for creators with unique perspectives and approaches to both comedy and animation. We often reach out to artists directly to let them know about the program, but we also regularly receive unsolicited pitches from creators, artists, managers, etc., and those are reviewed internally by a small team for a possible green light to join the program.”

Taking an Old-School VFX Approach in ‘All Quiet on the Western Front’
‘Natural Habitat Shorts’: Like ‘Ranger Rick,’ But for Adults
Framestore Sets Sail on ‘1899’ with New Virtual Production Tools
Animated Characters: The Art of Babbitt – Part 1
Bruce Smith and Ralph Farquhar Talk ‘The Proud Family: Louder and Prouder’ Season 2
VFX is the ‘Thing’ for Tom Turnbull on Tim Burton’s ‘Wednesday’
We Need to Chat
F is for Flake: The (Not So) Great Animation Robbery?
END_OF_DOCUMENT_TOKEN_TO_BE_REPLACED