Piera Varda explains how he and his team at Peru-based La Escena Virtual designed and produced their ambitious animated short, ‘The Within,’ after upgrading their workflow to integrate new real-time tools that enabled much greater creative control and artistic freedom. 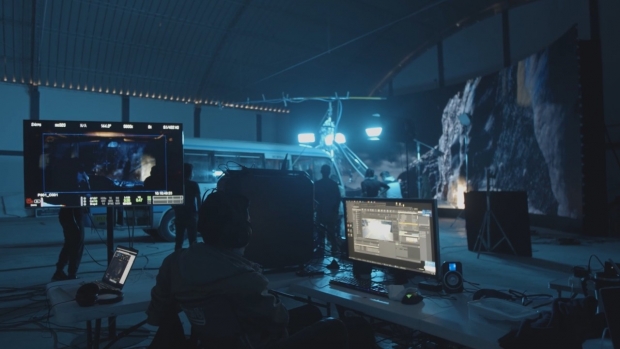 The landscape of video production continues to move at breakneck speeds. As production companies rush to keep pace with ever changing demands and deadlines, the need for programs that can maintain a powerful real-time workflow becomes all the more prevailing.

This was the challenge faced by Piera Varda and his team at La Escena Virtual, a virtual production company based out of Lima, Peru. As their ambitious video project, The Within began to take shape, there arose a need to upgrade their workflow and focus more on real-time and high detail motion capture workflows. In addition, the nature of their virtual production space opened the doors to numerous collaborative opportunities, requiring their projects to move seamlessly across different programs. With these needs, the options and flexibility offered by Reallusion’s Character Creator and iClone’s suite of tools, tools that offered even more creative control and artistic freedom than options like Unreal Engine’s MetaHumans. Reallusion’s suite offered Varda and his team new, high-end tools that allowed them to complete The Within in time for the Festival Internacional de Cine in Guadalajara, and has crafted a space for itself as the new industry standard software to help passionate filmmakers regain creative control of the film process.

All in the Details

Reallusion’s Character Creator suite has always been a designer’s dream tool with how easily it allows creators to generate, import, and customize both hyper realistic and stylized character assets. Varda and his team found that what this program offered even more than its ease of use and flexibility, was its control.

“The character’s morphs and skin tools inside Character Creator are designed so that an average user or artist can have absolute control during his creative process.” - Piera Varda

While options like MetaHumans have been an industry go-to, certain program constraints have made it difficult to tailor fit into any creator’s projects. However, Character Creator removes any such limitations and allows artists and designers to truly realize their creative visions. Character Creator allows for industry-leading pipelines within one system that not only provides character generation, but also animation rigging, look-dev rendering, and absolute control over the modification and sculpting of the characters.

Not only does the program provide this level of control, it is also powerful enough to provide indie filmmakers a chance to create incredibly high quality products that stand toe to toe with other industry projects. With its Subdivision Export, Character Creator can allow high-detailed refined shading, and smooth surface leveling that can render any low-poly 3D model for close-up shots and high-resolution outputs in real-time. This allows for live, active performances with the models that are still highly detailed for final productions. The Subdivision Export allows for these easily workable models to be incredibly detailed, but with the addition of Auto Setup, the models and products can be exported seamlessly through to Unreal Engine, with automatic, accurate shader and skeleton assignments completely automated. The characters created and imported through Auto-Setup have no hassle commonly associated with the workflow as everything from hair, clothing, and skeletal assignments are all automated seamlessly upon import. This saves an enormous amount of time and manpower that truly puts control and focus back on the product.

“Today procedural tools like Character Creator 4 are giving us indie studios the chance to enter markets that were far from our reach,” Varda notes. “We are very grateful for that.”

With the static characters and models completed thanks to Character Creator and its integration with Unreal Engine, Varda and his team now needed to breathe life and movement into them. This process was made incredibly intuitive and simple with iClone’s Live Link plugin and its ability to work and connect with Unreal. Varda’s team found that with Live Link’s different functionality, the process of driving the characters through motion capture was very straightforward. With little to worry about shader corrections, character models could easily be transferred over, and work could begin immediately on movement and actions. Not only did Live Link’s direct puppet tools make it simple to create the live animations, but the ability to have artists go through and clean animations and captures using the graph editor made each step of the process precise and accurate. In addition, the motion packs offered by Reallusion’s marketplace allowed for countless pre-arranged animations and poses to enable truly limitless possibilities with regards to saving time and still obtaining the deserved blocking.

But character animations still face the hurdle of terrain and environmental interactions. However, Live Link’s Two-Way Data Link makes this a complete non-issue. With the ability to adapt any iClone animations, including ones done through motion capture, to Unreal Environments, creators can have incredibly detailed and accurate interactions between characters and environments. From terrain height detection to accurate object interaction and manipulation, Two-Way Data Link ensures that the detailed characters created look just as great interacting with the world as they do in motion.

The final hurdle indie filmmakers like Varda may face is more hardware based than software. Although the creation of their products is all well and good, but when it comes to the recording and rendering of their productions, they may run into limitations like frame drops. However, Live Link’s Timecode Sync can level the playing field. With full frame recording in Unreal Sequencer, Timecode Sync can avoid Live Link frame drops. In addition, it also allows for timeless across iClone and Unreal to be perfectly synced 1:1. With each sequence saved and timecode recorded to Unreal Engine, it also allows designers to load them back into Unreal Sequencer to further edit and fine tune the animations.

With the completion of The Within, Varda and his team represent a new wave of cinematography and virtual production. Indie filmmakers from around the world are now realizing their visions and ambitions through 3D animation, VFX, and film. With tools like Reallusion’s Character Creator and iClone, it has increasingly blurred the lines of conventional, high budget productions, and passion projects from smaller creators. These programs open a new door for creative minds and continue to provide powerful tools that allow storytellers to realize their visions.

“We learned that iClone and Character Creator were tools that worked seamlessly with Unreal Engine,” Varda concludes. “Additionally, we eventually discovered iClone’s Live Link and how it lets all the animation tools we were now using, work in conjunction with Unreal Engine - and after that we were totally hooked.”

Choc Chip Animation Riffs on Pop Culture in ‘The Art of Murder’
F is for Flake: The (Not So) Great Animation Robbery?
Re-VIEW: ‘Avatar: The Way of Water’ – A Miraculous Vision
‘Kung Fu Panda: The Dragon Knight’ Celebrates a Special Lunar New Year
END_OF_DOCUMENT_TOKEN_TO_BE_REPLACED