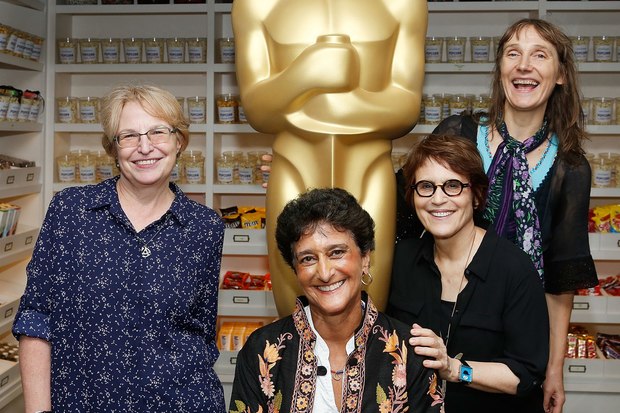 Once upon a time Manhattan’s Lower East Side was home to wave after wave of immigrants. They inhabited the neighborhood’s shabby low-rent tenement apartments before moving to New York’s outer boroughs and eventually the suburbs as their circumstances improved.

That was a long time ago. Now it’s impossible to find a humanly affordable Lower East Side apartment. (Or just about anywhere in New York City for that matter, but that’s another story.) The neighborhood’s become home to trendy bars and coffee shops where young aspiring professionals who now occupy those apartments congregate.

It’s also home to the Metrograph, a unique movie theater sporting a bar, restaurant, bookstore and two screens offering an eclectic mix of foreign, independent and genre films. The Metrograph is in its second year of hosting monthly special events organized by the Academy of Motion Picture Arts and Sciences; September’s event was “Women in Indie Animation,” an evening of short films and a panel discussion featuring their creators, four celebrated New York animators. The evening began with Emily Hubley’s flowing, thin lines and occasionally semi-abstract animations, including Pigeon Within (an alienated young woman’s wanderings, superimposed over grainy, high-contrast black and white photographs); Hail, set to a folk song celebrating couples of all genders (“we can be whatever we want to be”) and Brainworm Billy, the travails of a young man who can’t get Billy Crystal out of his head, out of the crystal he uses to ward off evil spirits (“none of the spirits were this annoying”) or even out of his pizza’s pepperoni slices who take on the comedian’s appearance.

Next up were broad and brassy works by Debra Solomon. Apart from an animated segment produced for the Disney Channel Lizzie McGuire TV series, Solomon’s films were set to original songs performed by the animator herself, starring her cartoon alter-ego: a frumpy saggy-boobed, frizzy blonde-haired gal in a white, lavender polka-dotted dress. In My Kingdom she fiercely protects her personal space to the point of climbing into a baby stroller to harangue its occupant or complaining about the crowded Trader Joe’s on East 14th Street. (I’ve shopped there and she’s not kidding); while equally raucous, I Wanna Know Everyone in My Building and Teach Me To Be A Woman’s humor were based on themes of loneliness and negative body image.

Signe Baumane’s work simultaneously explores and burlesques female sexual desire, but also examines darker themes via mordant humor, as in the trailer screened for her feature Rocks in My Pockets recounting her family’s history of suicidal depression. Several Teat Beat of Sex shorts featured her character contemplating “dicks” of all shapes and sizes all night long, some way too large for the vagina-as-teacup in her hand. At 12 minutes her film Birth was the evening’s longest piece, the poignant story of a confused teenager whose pregnancy is met with less than joy by her judgmental mother and heartbroken aunt. (Spoiler: it ends happily.) When the lights went up conversation ensued, as the four animators discussed their work and answered host Peggy Stern’s questions in a freewheeling session repeatedly punctuated by laughter and applause.

Stern asked what being an “independent” animator meant to them. Having never worked otherwise, Hubley described the word as “almost meaningless” in her case. Kugel described working commercially as a choice made as a result of being unable to get grants to finance independent projects. “Once we formed Buzzco I had two very forgiving partners who allowed me to make independent films,” she said. Baumane described independence as “working outside the studio the system…animation has always been the stepchild of the film industry. If you’re an animator you’re not taken seriously, and if you’re a woman on top of that [it’s even worse] so it’s very natural for me to be independent.” Stern next asked the quartet to describe the inspiration for one of their films. Solomon explained that “My Kingdom started with a revelation. A weird vibe thing happened with a woman on the subway. All of a sudden we were running up the stairs and I was trying to beat her to the top. I was so angry with her, then I realized that is so fucked up -- and that’s a film.”

Baumane was inspired by an invitation to “‘come over and pitch some projects.’ Oh my God, somebody wants me to pitch something -- finally I’m going to be rich and famous! I brought a script and some things I had left over and rushed to Williamsburg [a Brooklyn hipster enclave] and met four men wearing suits in a tiny room filled with sunlight, everything was so slick,” she recounted.

“Every time I’m very nervous I start talking about sex: ‘I like to talk about the size of dicks. Men are really obsessed about dicks and they shouldn’t really be, right?’ These men are laughing and laughing. Okay, I’m ready to pitch and they said, ‘no that’s your pitch. You record yourself talking about sex, that’s your favorite thing in all your projects.’ I asked what they were paying? They said $1,000 -- and they wanted all the rights, including making puppets out of my characters. I said, ‘that’s not a deal at all, I’m not agreeing to that,’ and they said goodbye -- that’s my project!”

Like Baumane, Candy Kugel’s A Warm Reception in L.A. was based on, as the expression goes, actual events. “Nobody ever says no in L.A. They’d say ‘this is great, this is fabulous’ and then you never hear from them again. We had a project we were really excited about and Buzz [Potamkin, Buzzco’s founder] was pushing it in L.A. at the time. We asked him how it went. He said, ‘we got a warm reception in L.A.’ and started singing this little mambo, ‘I got a warm reception in LA.’ I said ‘we have no projects right now, I think your song is really great.’” Lyrics were written and a friend familiar with Hollywood promises composed a music score to accompany them. “Vinnie said, ‘I guess we gotta make it now’ -- and that was A Warm Reception in LA.” When the subject turned to technology’s impact on their craft, Kugel looked back to the start of her career “animating when I was 19, like 1,000 years ago when everything was shot on film and drawn on paper. Almost every film we did was to try out another kind of technique. I liked the idea of coloring over black, which was really hard to do under a camera, you had to worry about dust and light and everything else. Our cameraman just got a polarizing filter. I said, ‘oh boy, let’s try to use this.’”

The filter made filming black backgrounds much easier, but it was just the beginning of her embrace of new production techniques. “I learned Photoshop and After Effects to layer paint and create textures” and ultimately embraced digital animation via Toon Boom,” she said. “The whole thing is still being able to do the drawing and make the technology work for you. It’s been kind of fun to expand the palette with the new stuff I can do. At first though it seems like the technology makes everything so hard when it’s supposed to help you.”

Solomon said she still “loves drawing with a pencil,” (and plugged her current favorite brand, Blackwing, earning a bit of applause from its fans in the audience), but admitted using a digital program to color her art. “For me my exploration at this point is less visual and more working with music and learning how to play an instrument,” she said. “All of us explore different forms in our art and I think that’s what creates the magic for us. It’s like there’s always a room you haven’t been in yet and finding out what you can do in there.”

Baumane seconded Solomon’s fondness for pencils but described a commission from a Milan store to create 30 papier mâché sculptures (“I got paid for them, which was miraculous”) that served as an inspiration to take her animation in an entirely new direction. “I thought bringing dimensionality to work would be so amazing, maybe I would get paid for doing animation. So that’s what I’m doing now, making papier mâché backgrounds for my films. I draw by hand, scan and color them in Photoshop then digitally combine them in After Effects with moving three-dimensional backgrounds. It’s only possible with digital tools; it gives me great control over how my characters interact with the background and fit in with the music and soundtrack.”

Stern’s final question was unavoidable: the role of gender in the women’s films. Baumane’s answer started the dialog off with a bang: “The Teat Beat of Sex is not autobiographical -- I just want to tell you that,” a line that earned loud applause and raucous laughter. Kugel’s response was more grounded: “A lot of stories came from trauma a variety of times, but I was also working with Vinnie for 38 years. So even if I came up with the idea or a story or whatever…when A Warm Reception in L.A. was shown at Annecy someone on the pre-selection committee insisted I could not have written because I was a woman and they were sure it had been done by a man.”

For her part Solomon wasn’t sure whether or not she was “coming from a place of female gender, but in Teach Me to be A Woman my relationship had just broken up and I was really in a period of redefining myself as a woman, buying clothes at Forever 21.” Solomon’s reference to the trendy young-skewing store earned another round of laughter from the audience.

Solomon explained the inspiration for Teach Me came from “waking up Sunday morning two days after my husband had left me and seeing a naked woman in a window above the night club across the street. I watched this 23-year old or so woman, thinking, ‘holy shit I want to be like that!’” (In the film, Solomon achieves her dream by climbing into the woman’s skin through its zippered back as though she were donning a costume.) “That might happen a different way for a man,” she added as an afterthought.

The evening ended with the animators fielding a few questions from the audience, including one asking for advice in building a personal voice. “The first thing I do in the morning,” said Solomon, “is write at least three pages every day; it’s a way of hearing yourself, seeing your song.” Baumane offered some very specific advice: “Be a well-rounded person -- have a passion. I meet so many young people visiting the studio; quite a lot of them have no interests except ‘I want to be an animator.’ Come on guys! See some theater, see some live-action [films]. If you can’t write, read a lot, meet people outside your circle. Expand your horizons, be curious about everything.”

VFX is the ‘Thing’ for Tom Turnbull on Tim Burton’s ‘Wednesday’
We Need to Chat
Choc Chip Animation Riffs on Pop Culture in ‘The Art of Murder’
F is for Flake: The (Not So) Great Animation Robbery?
Re-VIEW: ‘Avatar: The Way of Water’ – A Miraculous Vision
‘Kung Fu Panda: The Dragon Knight’ Celebrates a Special Lunar New Year
END_OF_DOCUMENT_TOKEN_TO_BE_REPLACED