The Absurd, Surreal, Metaphysical Creation of a No-Budget Animated Feature

Over 15 years, more than 200 volunteers, and several brave firemen, assisted in the production of Oliver Simonsen’s CG animated film, ‘The Absurd, Surreal, Metaphysical and Fractured Destiny of Cerebus the Aardvark,’ based on Dave Sim’s celebrated comic series. 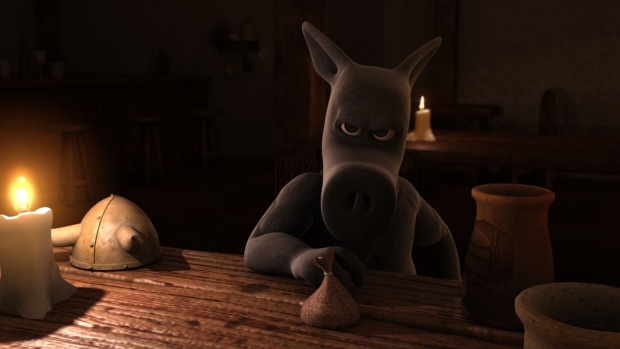 In December of 1977, Canadian cartoonist Dave Sim published the first in a series of comic books called “Cerebus the Aardvark.” Distinguished by its formal and narrative experimentation, the series began as a parody of sword and sorcery comics (in particular “Conan the Barbarian”), but soon began exploring a range of other subjects, including religion, politics, and sexual roles. “Cerebus” ran for 300 issues until March 2004, earning it and its creator a place in Guinness World Records for the most consecutive issues of a comic book drawn and written by one person.

In 2006, Oliver Simonsen, having decided that Sim’s creation deserved a life beyond the two-dimensional page, began working on a CG animated feature based on the series. He had no budget. He had no crew. He knew that Sim had already turned down offers from George Lucas, DreamWorks, and Paramount and, when Simonsen contacted him, Sim told him that he should feel free to go forward, but there was a 99% chance that Sim wouldn’t approve the final film. Clearly, he had no choice but to go forward.

For the next 15 years, Simonsen and more than 200 volunteers around the world devoted whatever time they could spare to making the film a reality. In late December of 2021, as pigs flew through the sky and hell experienced a rare cold snap, Sim gave the finished film a thumbs up, and The Absurd, Surreal, Metaphysical and Fractured Destiny of Cerebus the Aardvark began streaming on Plex and Comcast's Xumo (free with commercials) and Vimeo On Demand ($0.99, commercial-free). OK, you say, great story. But what really happened?

“I believe it started with a Christmas card I sent to Dave that included a CGI Cerebus I created,” recalls Simonsen. “He was gracious and encouraging, though as far as me making a film, he didn't think there was a chance of that reaching an acceptable level, in which case he couldn’t approve it – which, to be honest seemed fair to me. He's known for his integrity, and I figured if it was no good, we wouldn't want it shown anyway.”

Armed with his ringing endorsement from Sim, Simonsen launched the idea into the webosphere and immediately got traction with fellow artists, most of them strangers, from across the globe. “Working in a forum, we practically overnight had three Cerebus models that members had taken it upon themselves to create,” he relates.

When they confronted their first creative decisions – what CGI software and which Cerebus model to use for the film – they decided that everything would be put to a vote. (Maya won the software competition.) And in just a couple of weeks, they were off and running.

“The film kept a tremendous forward momentum, even though people naturally would have to move on sometimes because, you know, life,” Simonsen says. “Many would return intermittently. New members were either friends of current members, or artists who saw what we were doing, or people I reached out to through various online resources, like AWN.” By Simonsen’s reckoning, in all the film reflects the talents of 15 actors, 100 3D animators, 45 modelers, 16 texture artists, 19 riggers, 10 hair/cloth artists, 10 lighting artists, 6 2D animators, 6 composers, 5 sound recordists and 2 renderers. He notes that a number of artists wore multiple hats, which accounts for the discrepancy between the number of positions (234, you’re welcome) and the grand total of about 200 individuals who volunteered their time and efforts.

As for the producer/director/writer/editor/crazy guy who made a feature with no funding, Simonsen’s past experience includes making some super 8 movies and Flash cartoons, majoring in film at Cal State University, Long Beach, and creating a comic called Captain Zap, of which pioneering cartoonist Howard Cruse said, “Samuel Beckett has been reincarnated and been abducted.” He cites as influences Jay Ward, directors Tim Burton, David Lynch, Ingmar Bergman, Spike Lee, Alex Cox, Paul Verhoeven and James Gunn, among others, and French and Belgian comics such as “Asterix,” “Lucky Luke,” and “Spirou and Fantasio.”

Needless to say, apart from the overarching challenge of producing an all-volunteer feature, as in all ambitious animation projects, Simonsen faced a number of other challenges, notably issues with software incompatibility and, shockingly, updates that caused unexpected problems. The director credits Technical Director Nick Wolensky with rescuing the film from potential disaster on more than one occasion.

However, the most harrowing close call had nothing to do with glitchy software or uncooperative algorithms.

“We had just moved to Northern California wine country,” Simonsen relates, “when the Tubbs fire hit – which was then the most destructive wildfire in California history. We had to flee in the middle of the night, leaving, among other things, the hard drives with the film on them. Thanks to former firefighter Robert Morgan, who lived down the street, and the three brave Santa Rosa firefighters who fought alongside him, our place wasn’t completely destroyed, and the drives were saved. I'll be forever grateful to them.”

And so, having survived the ravages of fire, digital malfunction, and 15 years of on-and-off-again production, The Absurd, Surreal, Metaphysical and Fractured Destiny of Cerebus the Aardvark, arrived on the small screen. Through the auspices of Filmhub, the film will soon be available on Vuuzle, Tubi and Amazon Prime, in addition to Plex, Xumo, and Vimeo On Demand.

While Simonsen isn’t holding his breath with regard to a significant financial return, the profits, if any, will be divided among the 200 contributors. Subject to a vote, of course.