‘Abominable and the Invisible City’ Offers a Modern, ‘Therapeutic’ Twist on Chinese Folklore

For story editors Tiffany Lo and Ethel Lung, growing up listening to stories about ancient China helped them show how lead character Yi finds closure from her father’s death by discovering magical creatures throughout the country that need her help; all-new DreamWorks Animation series debuts today on Hulu and Peacock. 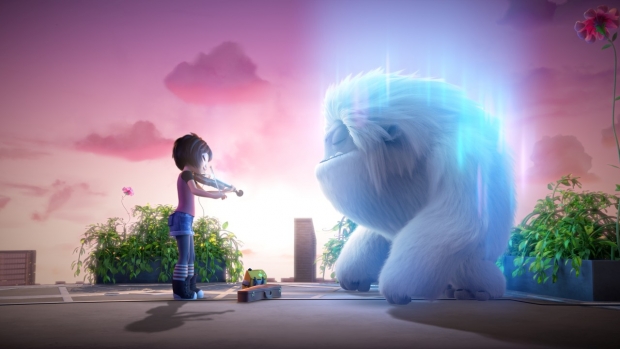 “Abominable was this beautiful film with a great message,” says Jim Schumann, an executive producer, with Katherine Nolfi, on DreamWorks Animation’s all-new series, Abominable and the Invisible City, releasing today on Hulu and Peacock. “I just fell in love with the characters. For me, this series was all about being able to tell their stories, to dive deeper into Yi’s story and her relationship with her mom and her Nai Nai, her friends, and Everest and these new creatures.

In the series, Yi and her enchanting violin stylings once again take viewers around China, but this time, rather than speeding across the country to get a lost Yeti home, Yi and her friends are exploring the streets of their own city, Shanghai, to find other magical creatures who need help finding their way home.

The 10-episode comedy-adventure series, continues the wild and wooly fun of DreamWorks Animation's Abominable. Through Everest the yeti (Darin De Paul), Yi (Chloe Bennet), Jin (Tenzing Norgay Trainor), and Peng (Ethan Loh) learn that there’s a whole magical world out there, and now it’s even closer than they think. When they discover that their surroundings are teeming with magical creatures in need of their help, the kids set out on extraordinary and heartfelt adventures throughout their city and beyond.

“We tried to do what the film did on an episodic level,” explains Schumann, known for producing the Spirit Riding Free series and shorts. “We do spend some more time in the city, and that was key for us, that the city had to feel alive. Shanghai was a character and we do spend some time in hidden parts of the city, with beautiful temples and museums. But then we venture out into the countryside. It’s like a microcosm of the film, going to these different places and finding different creatures.” Schumann says that if the film was like a bus tour around China, episodes of Abominable and the Invisible City are chances to get off the bus, walk around, and explore. But the setting isn’t the only aspect of the story at which viewers get a deeper look.

“I wanted us to really delve deeper into the heart of the show, and with Yi’s compassion and her empathy,” says one of the series’ story editors, Tiffany Lo. “We really get to see that play out in her dealings with not only her family and her friends, but also the magical creatures that we get to see in the series. We wanted to really pump up the emotion of it, underneath all the adventure.”

Another series story editor, Ethel Lung, adds, “The film is all about Yi having closure with her father's death. And I really wanted to see her heal in a television show and see what she could do from her healing process by helping other creatures as a fierce female leader.”

Lung and Lo both grew up hearing about the magical creatures featured in the series. For them, Abominable and the Invisible City was the chance to take stories they’d heard as children and bring these creatures to life the way they’ve imagined them for years.

“I grew up reading Chinese mythology and having my grandmother telling me all these stories,” says Lung. “We wanted to create something new, tell our own story and have our own modern twist on what fictional creatures we could.” “I grew up in the States, but my grandmother is from China, and she lived with us when I was younger, so a lot of these fables and stories came across to me,” says Lo. “Ethel and I both grew up with these stories and to be able to do our version with input from how we always saw them when we heard the stories, and then seeing that come to life, was really cool. The design team was freaking amazing.”

Lo and Lung worked closely with the show’s art director, Sei Nakashima, to come up with creature designs not just authentic to the tales, but also cohesive with the vibrant and wonderfully flamboyant world of Abominable.

“The Nian is much more colorful in our Abominable series than the Chinese version,” says Lung. “It's not just going to be a Chinese painting-looking thing, but we also didn’t want it to be too cartoony.”

She continues, “Because it’s modern time, we didn’t have a box that we had to be in. We could take the story, and these creatures, anywhere we wanted to. The challenge was to sometimes make the story with these characters a little bit smaller and narrow down ideas to make sure it's about the heart. “Our creatures were more loosely inspired by the fables, and the rest was put in to help make these stories digestible for kids,” explains Lo about the narrative surrounding each magical creature adventure. “Todd the Toad is about prosperity, so we made the episode about wishes and how you can over-wish.”

Lung adds, “And then the koi fish in a Chinese fable represents strength and determination as it swims up to a very, very high river and into the Golden Gate. But we totally took a left turn on that story. Instead of a Golden Gate, we're going to a museum and instead of swimming up a very high river, we're going to get into a sewer to do a heist.”

The messages of the series’ episodes all deal with growth, healing, and the characters becoming the best versions of themselves that they were always meant to be, not unlike the original storyline in Abominable.

“Yi, at the beginning of the movie, felt very alone,” notes Lo. “But we got to really see her grow into the leader of this found family. In the series, we get to see, not just Yi, but all the characters go on this journey of finding themselves and being more secure, moving their way through life and coming out the other end really knowing who they are.”

“It’s not a creature of the week and that was important to us,” adds Schumann. “We spend time with them, getting to know them on that emotional level, so when we put them in these crazy adventures, the audience cares for them more. They’re really genuine, fleshed-out characters.” While Lo and Lung grew up hearing these Chinese folklore stories, they also know firsthand, as actors in films such as Single by 30 and writers for features like Blood & Treasure, what it’s like trying to make one’s way in an unfamiliar and sometimes intimidating world. For Lo, in particular, she says the experience of working on Abominable and the Invisible City was “very therapeutic.”

“We grew up in a certain way, and we now find ourselves in Hollywood and you feel like a koi fish swimming upstream,” says Lo. “It takes persistence and perseverance.”

Messages about inner strength, identity, and belonging have come through in other relatively recent animated films based around Asian culture, such as Wish Dragon, Over the Moon and Raya and the Last Dragon. “It goes hand in hand with the power of connection, and the power within ourselves to open up and connect with people who we normally wouldn’t connect with,” says Lo. “It can be very healing being vulnerable and have someone say to you, ‘I see you.’”

And she hopes that Abominable and the Invisible City will provide that kind of affirmation to young Asian audiences. “It’s the stories that we wish we had more of growing up,” shares Lo. “This is the stuff we would have loved to see, where we branch the Chinese fables with modern storytelling about growth and second chances and love and connection and all the mushy stuff that was void and that we wish we had more of.”

“They're just a bunch of kids, in a sense, doing their best to let other people feel like they belong,” adds Lung. “I think, right now, a lot of children, a lot of people, feel very alone. And I hope this show can offer some comfort and a sense of community and love.”