40 Years in the Making: ‘The Smurfs’ Return to TV 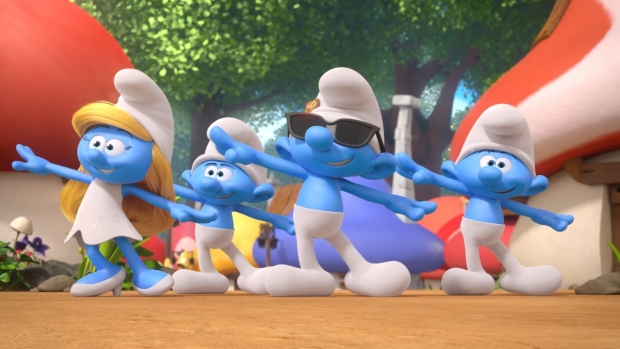 Premiering on Nickelodeon tomorrow, September 10, that iconic gang of little blue Smurf Village inhabitants – including Papa Smurf, Smurfette, Brainy, and Hefty - returns with another set of adventures in an all-new CG animated series, The Smurfs. New episodes will continue to rollout Friday nights on Nickelodeon, debuting internationally this fall.

The storied franchise’s first new animated TV series since 1981 was developed as a continuation of creator Peyo’s books, with original stories showing the Smurfs in a new light. According to head writers Peter Saisselin (Sonic Boom, Alvin!!! and the Chipmunks) and Amy Serafin (Sonic Boom, Alvin!!! and the Chipmunks), “For example, Smurfette is much more empowered in this new series - she’s even an expert in the little-known martial art ‘Smurf-fu’! There are a few new characters, too, notably other girls from Smurfy Grove - originally introduced in the third movie.” In writing the new show, Saisselin and Serafin wanted to develop the characters more fully, giving them each their own fears, hopes, and dreams. “We wanted to push them to ask bigger questions, hoping to create more chaos and comedy, but also more empathy,” they note. “For example, in one episode, Gargamel tempts Clumsy with an amulet that will make him graceful. Clumsy relishes the idea. But in the end, when his clumsiness actually helps him save his fellow Smurfs, he realizes he’s perfect just the way he is.”

Though the writers worked from well-known source materials, their collaboration with Peyo Productions and other series producers was based on taking Peyo’s famed characters in new directions. “We took a lot of inspiration from the quirky tone and humor of Peyo’s books, and stayed true to his vision of the characters, while rounding out their personalities as much as possible,” the writers explain. “Our (and the other writers’) original story ideas had to be approved by the rights holders, the producer, the director, and the networks. Peyo Productions was very vigilant about maintaining the tone and respecting the universe, but also open to pushing the boundaries, as long as it made sense. They gave us notes throughout the process, and it was really a team effort.”

For Saisselin and Serafin, producing the show in CG, rather than 2D, was not easy; The Smurfs takes its design cues from the late Kelly Asbury’s 2017 CG film, Smurfs: The Lost Village. “We would say the biggest challenge was working within the limits of 3D,” they share. “It can be expensive, and we had to be clever in our reuse of props, sets, and guest characters. Also, fitting an entire story with its twists and turns into an 11-minute script, including humor and character development, is always a challenge!”